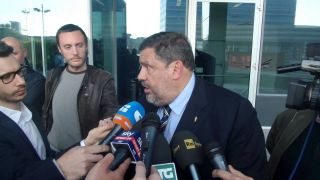 The leader of AC Milan’s small shareholder group – Giuseppe La Scala – has reiterated his belief that Elliott Management will not be around for long.

There has been speculation in the media since they took over that the American fund are not looking at holding on to ownership of Milan for a long time, instead intending to transport the club into a much healthier financial position before selling for a profit compared to the price they seized the club for.

La Scala spoke to Radio Sportiva’s microphones about the future of the Rossoneri, also demanding that the club get back to being competitive on a European stage as soon as possible.

He began by reflecting upon the current positive moment that the club are experiencing, with his words transcribed by Calciomercato.

“AC Milan has found security and a good style of play, but to think that this team will go to the Champions League next year in slippers would be absurd. To continue we must operate on the market, with important signings,” he said.

“Elliott? Passing owners, these operations tend to organise a company advantageously in 2 to 3 years. This explains the attention to salaries and cost containment.”

Ibrahimovic showed everyone what he is capable of at the ripe age of 38 on Wednesday night as he scored a brace to move on to nine league goals in 2020, and he also provided an assist for Hakan Calhanoglu.

La Scala commented on the Swede’s impact: “Ibra? I didn’t think he would, but he gave this team an obvious added value.

“Now he must be included in a project where AC Milan grows further, perhaps with a young striker who can work alongside him and replace him.”