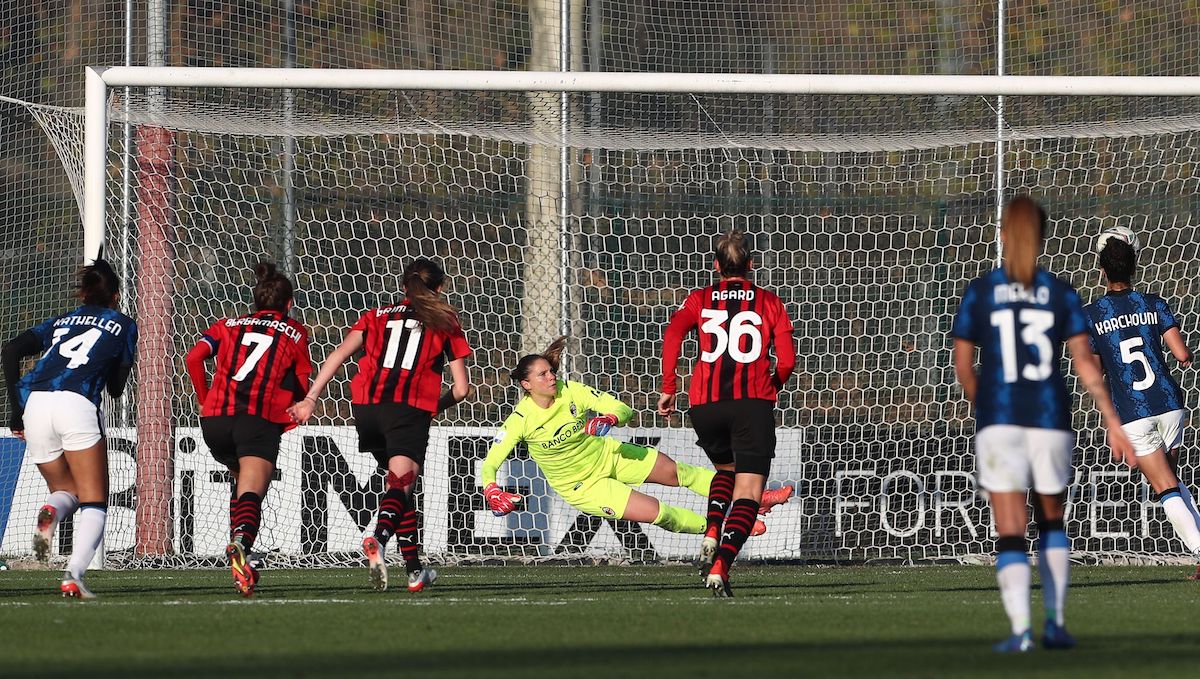 The AC Milan Women suffered a heavy defeat against Inter on Sunday as they lost the derby by a score of 3-0. This was the first time the Rossonere had lost to their crosstown rivals in Serie A Femminile.

The derby against Inter saw the return of two important pieces of Milan’s puzzle: Refiloe Jane and Sara Thrige. The two players were a much-welcomed sight for sore eyes.

The two also helped the team get off to a good start and Milan had an early chance through Lindsey Thomas. Thomas, however, could not convert it. And it was the guests who took the lead in the 13th minute, as Ghoutia Karchouni’s corner found the top of Kathellen’s head. It was almost a carbon copy of the goal they conceded against Sassuolo.

The Rossonere tried to imply with immediacy and came close to equalizing in the 25th minute. They went close through a corner shot from Jane but the shot was not converted. Then, about two minutes later, Inter doubled their advantage through Ajara Njoya. The Cameroonian fired in a brilliant shot from distance, and there wasn’t much Giuliani could do to stop it. As was noted in the lead-up to the match, Njoya was one of the players to watch out for. And she made Milan pay dearly for their poor marking of her.

Two then became three as, in the 32nd minute, Adami conceded a penalty, which the previously mentioned Karchouni then converted from the spot. The score was now 3-0. Two minutes later, Giacinti tried to answer the goal, but Francesca Durante denied her that chance. Giacinti also came close to scoring again in the 47th minute, but her shot also hit the crossbar. The Rossonere would go into halftime without scoring a single goal.

After the second half started, the talismanic Gloria Marinelli nearly made it four for the Nerazzure after pouncing on a parried shot. Fortunately, her shot went wide of goal. The Rossonere tried to get on the scoreboard and nearly came close to doing so with two chances that began in the 55th minute. Unfortunately for them, Durante produced two reflex saves and denied both Thomas’ and Giacinti’s attempts.

A few minutes later, Thomas was then denied another goal-scoring chance by Durante. In the 73rd minute, Inter nearly had a fourth through Bonetti, whose shot went wide of the target. As the game drew to a close, AC Milan had plenty of possession but couldn’t carve out any meaningful opportunities.

The final score of the game was 3-0. And for the first time in their history, Milan lost the Derby della Madonnina in Serie A Femminile.

This was a frustrating and crushing defeat. Milan looked lost and timid on the field. The fact that deadball specialists like Vero Boquete were not summoned and played during the game just added to the sense of confusion, as the Rossonere had no idea who would be taking the corners and free kicks.

Add to this the injuries suffered by both Linda Tucceri Cimini and Laia Codina and the situation becomes a bit more dire.

The off the field turmoil seems to be affecting Milan as the refusal to convene Vero means that the team went into this important clash without one of their best players. The mystery surrounding the decision not to convene her also adds to the air of uncertainty around the squad.

This is not the type of environment that a team can thrive in. It feels like Milan are at an impasse and the continuous strife is eating them alive from within.

And it can only get worse from here as next week, Milan will play Juventus. The match will be played on Sunday, December 12th. Kickoff time will be 15:00 CET. The Rossonere will be up against it as they will have to climb a tall mountain to salvage some pride.