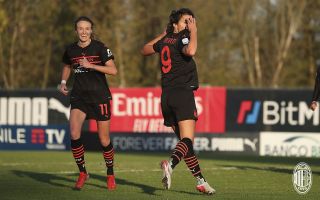 The AC Milan Women managed to squeak out a narrow victory against Empoli, emerging as the 1-0 winners in a hard-fought contest.

In the end it was Giacinti’s second half goal that was decisive again for the Rossonere, who recorded a valuable three points in what was a cagey and difficult game. Here is a summary of how they won…

Once again, Vero was absent for this match and Valentina Giacinti started from the bench. And just like last time, there was no explanation for this. Sara Thrige and Refiloe Jane were also absent, albeit due to injuries. The other surprise was that Laura Giuliani was benched in favor of starting Mária Korenčiová. Though it must be noted that Korenčiová put on a good performance in place of both Italy and Milan’s number one.

Milan started off the match well and went close to taking an early lead through Bergamaschi and then Adami. Unfortunately, they failed to convert either of their chances. The match was played at a rather slow tempo but Linda Tucceri Cimini had the chance to put Milan ahead at the 16th minute. But alas, the free-kick failed to find the back of the net. Empoli’s strategy was based on defending in a compact formation and breaking away on a counterattack.

Their strategy almost paid off as Dompig forced Korenčiová into a save at the 17th minute. Though Milan had more of the possession, the Tuscans looked like the stronger of the two teams during the first half.

As the half came to a close, Empoli had two chances through Bragonzi in the 44th minute and Nocchi in the 47th minute. Once again, the diminutive Korenčiová came up big in these precarious circumstances.

After halftime ended, the Rossonere started the second half well, with Thomas attempting the bicycle kick in the 48th minute. Captain Valentina Giacinti was substituted into the match at the 51st minute, while Rimantė Jonušaitė would make her debut alongside her.

Thomas would have another chance at the 63rd minute after Captain Valentina spearheaded a counterattack. And it was Valentina that would eventually give Milan the lead in the 68th minute. Fellow Valentina (Bergamaschi) kicked in the inswinger from a corner kick, and Gloria Ciccioli spilled the attempted catch. Giacinti’s foot found the parried ball and she buried it into the net.

Afterward, she turned towards the stands and made a heart sign with her hands in celebration. Following that goal, Empoli had a few opportunities to level the score but the Rossonere’s defending remained as resolute and compact as ever. They successfully staved off the challenge by the Tuscans.

In the 81st minute, Lindsey Thomas would be substituted out of the game to make way for Noe Selimhodzic. And in that instant, Selimhodzic would fulfill her lifelong dream of playing for the Rossonere.

Milan nearly doubled their advantage through Adami in the 83rd minute but it was to no avail. The last bit of action came in the 87th minute when Tucceri Cimini cleared Tamborini’s effort off the line.

There was something quite poetic about one of Milan’s most tenured and senior players denying their upstart loanee the equalizing goal.

Shortly afterward, the referee would blow the whistle three times and Milan were the victors of the game.

Milan and Empoli were fairly even in terms of their match stats. Both teams had 14 shots, while Empoli had more shots on target. They had five shots compared to Milan’s two goals in the penalty area. The only area where Milan managed to outdo their counterparts was in terms of possession, as the Rossonere had the ball 51.7% of the time.

This was also the fifth clean sheet of the season for Milan. Only Juventus has a better record than them in this regard. 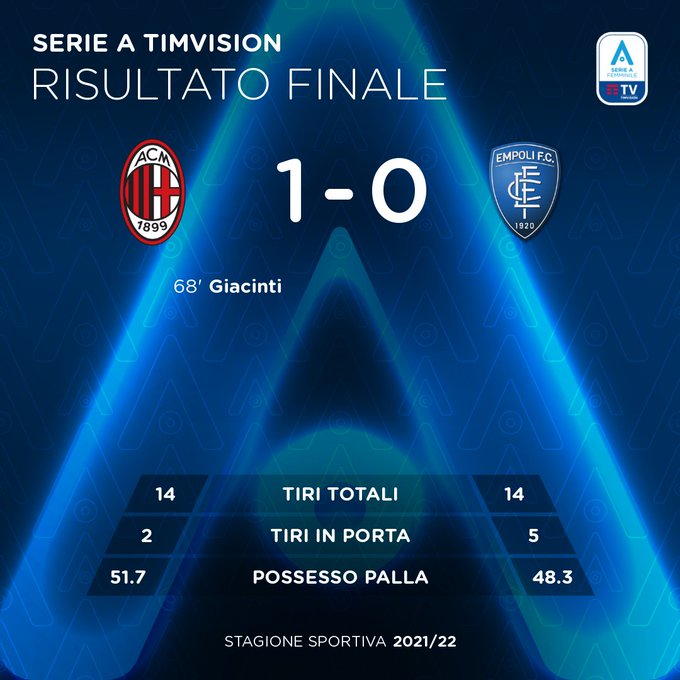 Valentina Giacinti has scored a total of seven goals this league campaign and her seventh goal was against Empoli. That makes her the current league capocannoniere.

As Forza Woso notes, this makes her one of the top six scorers in all of Europe. Vale is integral to this team and the Rossonere would be lost without her.

AC Milan will play Pomigliano next Sunday. The match will take place in the Stadio Ugo Gobbato in Campania. Kick-off time will be 12:30 CET.