The AC Milan women beat Empoli by a score of 1-0 on Sunday. The victory was a much needed morale boost after two consecutive defeats against Juventus and Inter.

The win was also a much needed lifeline, as it allowed them to remain in second place as they try to secure qualification for next season’s Champions League.

Here’s breakdown of the match…

Milan lined up in a 3-5-2 for the duration in the match. In the closing stages, they switched to a 5-4-1 to see things out. The notable difference between this match and the last one against Inter was the return of midfielders Verónica Boquete
and Refiloe Jane.

The two players provided much needed creativity and steeliness in the midfield. In particular, Jane’s  return brought back the defensive solidity and sense of balance that the midfield had sorely been missing.

Empoli, on the other hand, lined-up in a 4-5-1 for the duration of the match.

They chose to deploy a low block and hit Milan on the counterattack. Their main focal point of attack was midfielder Chanté Dompig, who was fielded as a false nine.

Their tactics were also quite effective, as they came dangerously close to scoring quite a few times.

Milan started the match off strong early on.

The Rossonere got off the ground running by relentlessly pressing Empoli high up the pitch. Here, we see how Yui Hasegawa and Vero worked in tandem to press a Biancoblu player, followed by Bergamaschi closing in for the kill.

Milan’s relentless pressing would force Empoli into making several errors. Sadly, the Rossonere would not be able to capitalize on the many chances that came their way.

The return of Vero Boquete meant the return of her creativity and leadership in the midfield.

The fantasista put in a fantastic shift for the Rossonere, and was the outstanding performer for them on the pitch.

Her performance was capped off by this near goal that somehow, inexplicably, failed to find the back of the net.

However, she would make up for this later by assisting Natasha Dowie with a goal.

Natasha Dowie scored the match winner for Milan at the 63rd minute.

The goal would also be Dowie’s tenth goal of the season.

And with this goal, Dowie continues to break records and has cemented her place in the annals of Milan’s history.

As was noted earlier, Vero was the one who made the crucial pass to Dowie that allowed her to score the match winner. The assist was also made by Boquete playing in a more advanced role behind the forwards, and pressing the opposition into giving up the ball.

It gives one pause for thought, as she seems to play better as a trequartista then as a more defensive centre-mid. Perhaps we’ll see her play behind the forwards again in the near future.

Empoli’s combination of youthful vitality, determination and talent made them quite the thorn in Milan’s side. Whenever the Rossonere would try to hit them on the counter-attack, Empoli’s forwards would take advantage of this and find space behind Milan’s defenders.

And by utilizing their quick and gifted players in attack and midfield, the Biancoblu were able to launch a few, formidable counter-attacks of their own.

In particular, Milan struggled to contain Dompig on the right-side of the pitch. The midfielder was simply too strong and too fast for the Milan defense, and often put them into precariou positions. She also had a few shots on target and had she been more clinical, she would have converted them.

Benedetta Glionna also gave Milan quite a few fits. The Juventus loanee gave the Rossonere defense quite a few fits thanks to her speed and creativity. Milan were quite fortunate she didn’t capitalize on any of them.

Credit must be given to the Rossonere’s defense, however, as they kept both Glionna and Dompig at bay. Laura Fusetti put in a strong shift as she marshalled the defense in the back, and it was through her leadership that Milan were able to keep a clean sheet.

The Rossonere players seem to overhit the ball, over dribble and lose the ball at times. In particularly, Bergamaschi seemed to suffer from this.

Though Milan won this match and the stats confirmed that they were the dominant team throughout it, the game was also fraught with many errors by the team. The team still needs to work on their finishing. The team also needs to strengthen the right side of their defense, so that they don’t get caught out of possession by the likes of Dompig again.

True to their form, Milan had the majority of possession during this match. They had the ball 54% of the time. They also had 22 shots on goal, yet were only able to convert one of them.

In the future, the team needs to learn to be more clinical in front of goal. 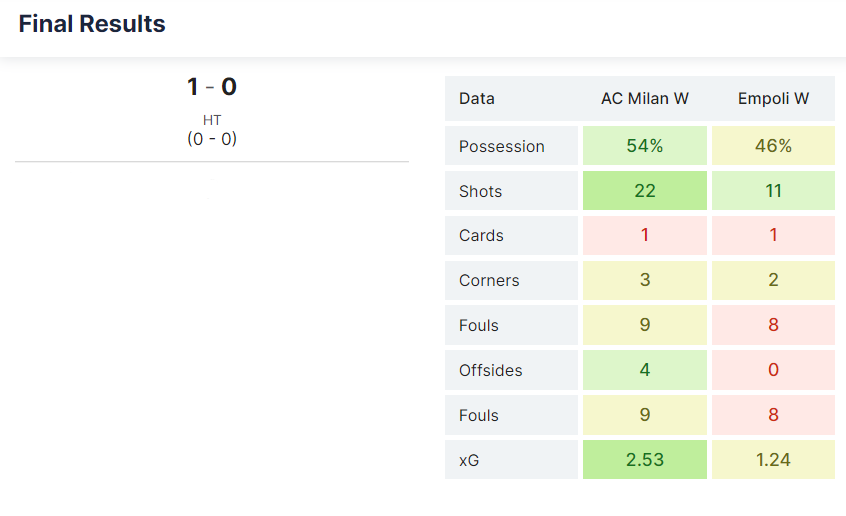 Milan will, once again, face Inter in yet another edition of the Derby della Madonnina. Only this time, they’ll be playing them in the league and not in the Coppa Italia.

They’ll be looking to get their revenge and to reassert their dominance over their crosstown cousins.

The Rossonere should be buoyed by the victory over Empoli and will carry that momentum into the derby.

And if they play their cards right, they just might win that match too.