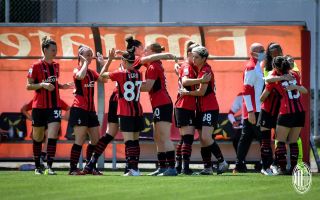 The AC Milan Women were held to a 2-2 draw by Hellas Verona on Sunday to end their season. The game was a chance for Maurizio Ganz to experiment with his line-up, with Champions League qualification being secured and the Coppa Italia final in mind.

One of the ways he did so, was by fielding a team that was largely comprised of reserves. Here we have a summary of the match…

As was noted before, Ganz fielded a team that was largely comprised of reserves. Starters Valentina Giacinti, Refiloe Jane, and Laura Fusetti were out, with Giorgia Spinelli, Claudia Mauri, and Deborah Salvatore Rinaldi taking their place. In the first five minutes of the match, Yui Hasegawa had a shot on target. Unfortunately, she failed to score the first goal of the game. Instead, it was Hellas Verona who took the lead through Ana Jelenčić (12’), who fired an absolute rocket of a goal from 30 meters out.

The Rossonere, however, did not give in. Natasha Dowie then came close to scoring in the 26th minute. Unfortunately, her header was saved by Francesca Durante with the help of the crossbar.

Hasegawa would also be denied by both just two minutes later. An equalizer finally arrived in the 38th minute, and it happened after the ball ping-ponged off of keeper Francesca Durante’s legs. Dowie then pounced on it and slotted it home.

As haphazard and clumsy as the goal was, it was also an important one. After all, it was Natasha Dowie’s twelfth goal of the season.

The second half began at a slower pace, with Ganz making two changes at halftime. Alessia Piazza replaced Selena Babb between the sticks and Sara Tamborini replaced Natasha Dowie. The changes did not affect the Rossonere too much, as they were still in control of the game. After a long spell of possession for Milan, the guests took the lead through Susanna after a swift counter-attack (67’). They did so against the run of play. The score was then 2-1 to Hellas Verona.

Milan, however, did not give up. At around the 70th-minute, Vero shifted the ball upfield through the middle, passed it to Yui, who then made a brilliant dummy play for Tamborini. Sara then slotted it home for her second goal of the campaign (73’).

As the Milan TV announcer Francesco Specchia said, ‘When she plays, she scores.’

The Rossonere would then see the game through, as Ganz decided to give a few minutes to Julia Šimić, Anita Coda, and Miriam Longo. Longo’s return was especially welcome, as it was the first time we had seen her in action after the unfortunate injury she sustained at the beginning of the season.

And with this game ending in a tie, Milan were able to end the season in second place. They finished with 51 points compared to their nearest competitor, Sassuolo, who finished with 50.

Milan have also dropped points during their last three matches in the league. However, one shouldn’t be alarmed by this. It seems like the Rossonere were being cautious during this match, with an eye towards the Coppa Italia final. It also would not have made sense for them to field a full strength line-up or take too many risks in light of such an important match.

With this in mind, one should, revel in the fact that they played Verona to a stalemate. But most of all, they should celebrate the fact that Rossonere have done enough to make this season a successful one.

One must also keep in mind that they have one more game to go, and they can make up for this in a big way by winning that one.

AC Milan decided to be their old selves again as they had the majority of possession. They had 62% of it while Verona had 38%. They also had thirteen shots to the Gialloblu’s seven.

The stats just prove that Milan were the dominant side, despite fielding a group of reserves. 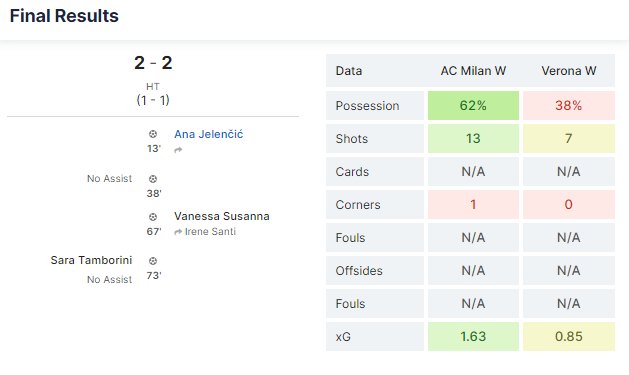 A lead-up to the all-important final will be posted within the upcoming days. The game will be a chance for Milan to win their first-ever set of silverware, and they’ll do everything in their power to make it happen.

Until then, can watch a full replay of the match here and the highlights down below.