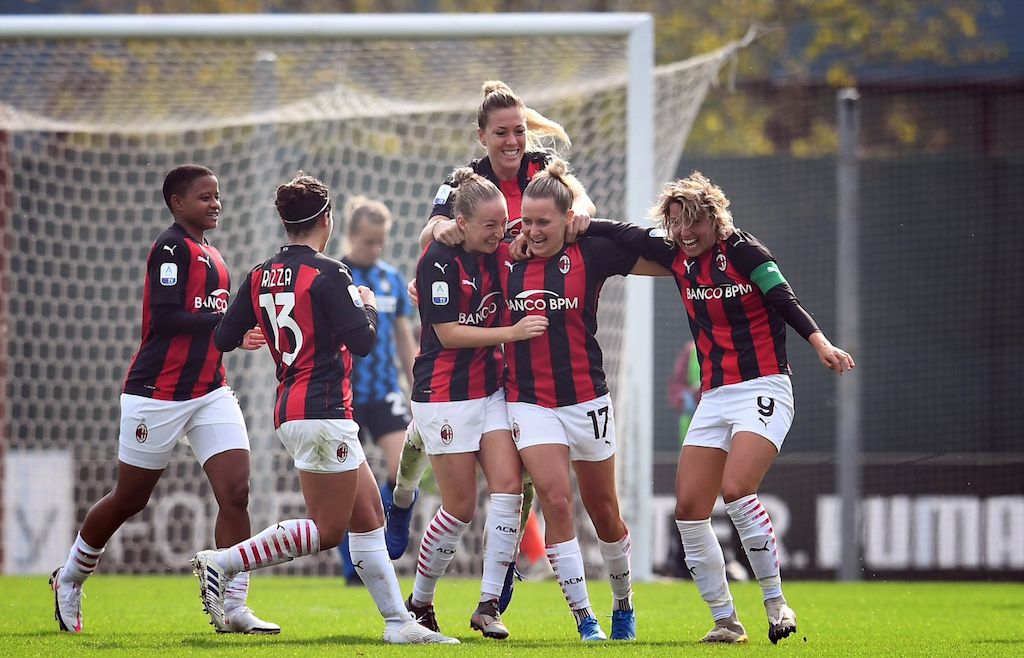 Last Sunday, the AC Milan Women beat Inter Milan in the Derby della Madonnina. In fact they didn’t just beat them, they thrashed them.

The Rossonere made it two for two for Milan that weekend witha  4-1 victory, as for the first time in history both the Milan Women and men won their derbies in a single campaign.

Below are some of the highlights of the match…

One of the highlights of the first half of the match, was Francesca Vitale’s tackle well-timed tackle on Gloria Marinelli.

The Milan defender made a crucial, last ditch interception to prevent what would have been Linda Nyman’s assist to her Inter teammate.

Vitale had a great match and proved that she’s adjusting to the 3-5-2 formation rather well.

Natasha Dowie gets her brace

Once again, the Milan #10 proved her worth by scoring a double, first at the fifth minute.

Then in the 28th minute…

Dowie was recently voted the AIC’s Player of The Month and after this performance, it’s not hard to see why.

Valentina Giacinti back in the groove

The Milan skipper recently endured a slump on the pitch. However, she seems to have broken that duck with her goal against the Nerazzurre.

Giacinti was also a ball of energy on the pitch as she pressed and harried the Inter players into making mistakes and helped her team win back possession.

Hopefully she’ll be able to carry that momentum with her into the team’s upcoming matches.

The Milan midfielder scored the team’s fourth goal and sealed the deal for them.

The Nerazzurre seem to be Čonč’s favourite victims. The Slovinian has scored in every single derby she’s played, and has scored four goals in total.

Every performance, no matter how good it is, has its flaws.

Federica Rizza, Milan’s right-back, proved how rusty she was by conceding a penalty late in the match.

Prior to this match, the fullback had been out since summer of last year after suffering a grave injury. Milan had to improvise and fill the void she left on the right flank, and they did so by playing several different players in her position.

One of those players was Valentina Bergamaschi. Speaking of which, Bergamaschi did not play during this match. The player had sustained a muscle injury in the days leading up to the derby and therefore, could not be fielded.

Berga will reportedly be out for up to 20 days. May she get well soon, and may we see her on the pitch again.

Every one of the Milan players who were fielded played their part in this victory.

However, one must give special consideration to Refiloe Jane, who was crucial to Milan maintaining control in the midfield. The midfielder battled to win back possession and was integral to Milan having the ball for the majority of the match.

Then of course, there is the trio of Laura Fusetti, Laura Agard, and Linda Tucceri Cimini, who snuffed out Inter’s attack and only allowed them to score one goal.

Without her, Milan would have conceded more goals. Thanks to her heroics and that of the team’s backline, the Rossonere were able to emerge the victors of this match by a score of 4-1.

And by winning this match, the Rossonere made made history, as this is the first time both the Milan Women and men have won their derbies in the same season.

Serie A Femminile is currently on hiatus for the international break. Once the league resumes, Milan will play Castelvecchio on November 1st at 1:30 PM CET.