The AC Milan Women defeated San Marino Academy by a score of 4-1 on Sunday. It was a slow start and a game they ended up conceding first in, but that ended up being the motivation that they needed.

Here are the key match highlights…

During this match, Milan finally deviated from the 3-5-2 they fielded in previous matches and lined-up in a different formation. The Rossonere lined-up in a 3-4-1-2 for this match, with Vero finally playing as a trequartista behind the strikers. 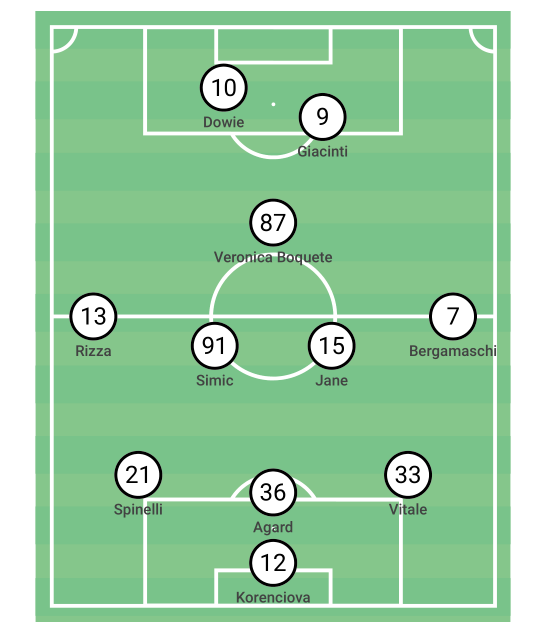 The Rossonere seemed to have suffered from their usual troubles during the first half of the match, chiefly in the form of their inability to convert all of their chances.

However, they came alive during the second half and scored four goals. The switch to a 4-3-1-2 also allowed them to safely see out this match and secure a vital victory.

AC Milan currently has the best defense in the league and one of the top five defences in Europe. During this match, the might of their defense was on full display.

The Rossonere’s defense was characterised by intelligent movements, passing, pressing, and marking as well. The offense worked in tandem with the defense as they pressed San Marino inside the box and forced them into making harried decisions, as they were given no time for build up play. 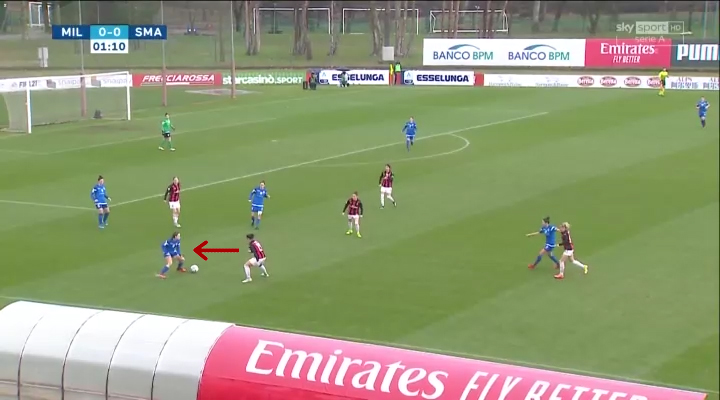 The harried pressing forced San Marino into making hasty passes, and it often left them confused as well.

Milan’s PPDA for this match was 5.0, meaning that the team would allow their opponents to make only five passes before pressing them (Wyscout). As a result, Milan limited the Academy to only three shots on goal. The only misstep from the Rossonere’s defense was the penalty conceded by Francesca Vitale at the 49th minute.

Other than that, Milan’s defense put on a clinic, and should be commended for it.

After San Marino went ahead due to penalty, Giorgia Spinelli answered that goal right back. The defender opened up Milan’s scoring account, and brought the two teams level.

To date, the defender has scored three goals for the Rossonere, and has been a fantastic addition to the team.

Dowie at the double

Once again, Natasha Dowie has shown just how invaluable she is for Milan. To date, the English player is the foreigner with the most goals for the Rossonere. On Sunday, she increased her tally for the team by two goals.

Her first goal came via a header at the 61st minute, thanks to a fantastic assist by Linda Tucceri Cimini.

The second one also came courtesy of a spectacular assist.

Once again, Vero put on a display during this match.

Her finest moment was this no look pass to Dowie that allowed Milan to double their advantage.

It’s the type of fantastic move that was plucked straight out of an NBA highlight reel, only it was done on a waterlogged pitch instead of a glossy court.

There are not enough superlatives to describe Vero as a player. It often seems like she’s a level above everyone else, and her vision makes a successful argument that she’s actually prescient.

The midfielder was one of the standouts during this match and the team has truly benefitted from her presence.

It’s always good to see a player return and it’s even better to see their return heralded with a goal.

After months of inaction, we finally got to see Sara Tamborini play again. Her substitution into the game turned out to be a masterstroke by Ganz, as she capped off Milan’s win by scoring their fourth goal of the game.

The other, noteworthy return besides Sara was seeing midfielder Caroline Rask substituted into the game at the 81st minute. Rask and Tamborini were substituted within three minutes of each other. The last time we saw the Danish international play was in Milan’s 2-1 victory over Napoli.

The hope is that we’ll see more of these two talented and promising players in the future.

Unsurprisingly, Milan dominated the stats for this match. They had 66% of the possession while registering 28 shots, with seven of those shots being on target. The defense was also quite effective, as they limited San Marino to three shots

They also had eight corners, while their opponents had none.

After this match, Milan will play Sassuolo in the second leg of their Coppa Italia tie. The match will be played at home for Milan at the Vismara, and at 14:30 CET.

The last match between the two ended in a 1-1 tie. If Milan wants to progress to the semifinals of the Coppa Italia Femminile, then they must win this game.

And given the way they played against San Marino, they just might have what it take to do so.