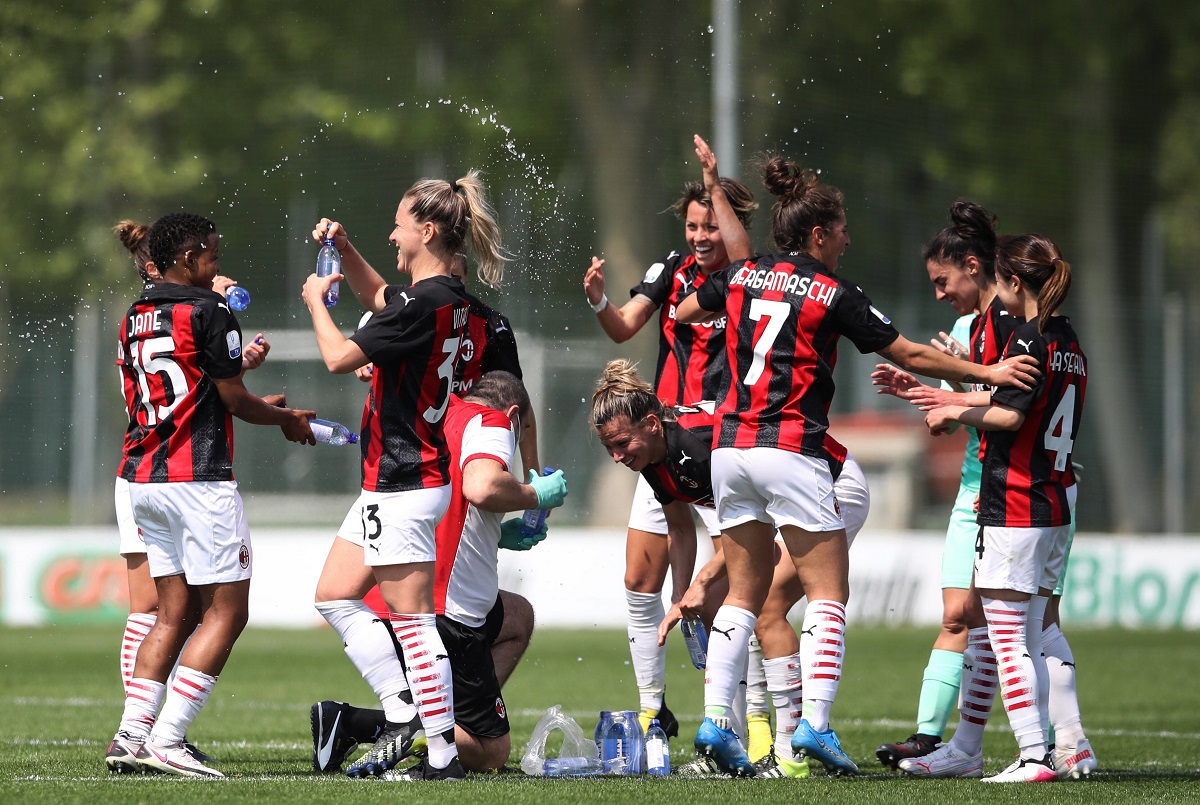 AC Milan Women managed to beat Inter Milan by a score of 4-2. The Rossonere got their revenge after their loss in the first leg, progressing to the Coppa Italia Femminile final on an aggregate score of 5-4.

It’s also worth mentioning that they progressed to the final for the first time in their history. Highlights of the match are below…

The game got off to a flying start, with Inter dominating the opening minutes but never really threatening Korenčiová’s goal. Gloria Marinelli got the ball rolling for Inter as she won her duel with Francesca Vitale and ran straight into the box. She then rolled a pass to Caroline Møller Hansen, whose shot was then blocked by Mária Korenčiová.

Milan answered a few seconds later, as Yui Hasegawa freed up space for herself then attempted a long-range shot, only for it to miss the target.

The shot on goal took some of the pressure off Milan, as it got their attack rolling, and they began to take control of the match through quick and incisive passes. Eventually, it lead to their breakthrough, as Vero Boquete evaded a string of defenders to score the team’s first goal. It was also her first goal in red and black.

This goal confused the Inter players and gave the Rossonere momentum, as they launched wave after wave of assault on the Nerazzurre’s goal. Giacinti and Dowie worked in tandem to continuously attack Inter, though it was Boquete who scored Milan’s second goal and double their advantage.

Natasha Dowie’s header went from being a shot on target to an accurate assist and thus allowed Boquete to find herself in a one-on-one situation with Inter’s goalkeeper, Astrid Gilardi. Vero then ran past her and scored a brilliant goal. Vero Boquete’s supreme technical abilities were on full display here as she scored both goals. She is simply out of this world.

Following this goal, the tempo slowed down a bit, but Milan continued to strike, while the Nerazzurre were unable to get out of their own half. Valentina Giacinti appeared to have scored Milan’s goal at the 36th minute, though it was eventually ruled offside.

Inter’s defenders remained locked into their positions as they tried to stave off Milan’s relentless attacking threat. The team kept their 4-3-3 shape throughout the match. Their midfield, on the other hand, was overwhelmed by the Rossonere, who outmuscled and outsmarted them.

Because they kept a 4-3-3 shape throughout the game, the Nerazzurre became quite vulnerable to counter-attacks. The fact that they have no strong defensive midfielder to shield their defenders only worsened the situation for them. The Rossonere’s wide players had plenty of space to break into and they used it to their advantage. And despite staying in the same formation through the match, there was no cohesiveness to the Nerazzure’s defensive structure. This allowed Milan to send in many horizontal long balls and crosses that led to them creating many chances for themselves.

Makeshift defender Martina Brustia did not have a good match for the Nerazzurre. As a result, it dragged down their overall performance. Her match was best summed up by the yellow card she received after a brutal foul on Valentina Giacinti at the 23rd minute.

Brutal fouls aside, Milan ended the half with a 2-0 lead.

During the second half, Milan had more possession and became more adventurous in the game. As a result, Inter scored an unexpected goal when Gloria Marinelli received her teammate’s pass and was able to fire the ball into the net. She managed to do this, all the while being marked by Laura Agard.

Milan, however, dashed Inter’s dream of a comeback thanks to two late goals by Natasha Dowie. Dowie’s first goal came as a result of her excellent positioning, as she was in the right place to receive Tuccerri Cimini’s cross and then slotted it home at the 78th minute. She did the same thing again in the 86th minute when Bergamaschi crossed the ball from the right-wing to a certain player.

Dowie’s remarkable ability to finish was on display during her second goal, as she had to time her header on the cross just right to score that goal. Fortunately for Milan, she seems to be prescient with the ball at her head and scored the game-winning goals.

Despite the fact that they were losing, the Nerazzurre did not give up and fought until the very end. This was evident by Caroline Møller Hansen, who dribbled past the Rossonere’s entire defence to score in the 91st minute.

In the end, Inter’s two goals were not enough to overturn the deficit. Through a stalwart performance that had a few flaws, Milan went on to win the match by a score of 4-2. The Rossonere dominated from the start and they emerged from the tie the deserved winners. And for the first time in their history, they will now play in a Coppa Italia final.

Milan’s defence was rather shaky during this match. Laura Agard had a particularly poor match. Here’s a breakdown of the mistakes the defence made as Inter’s Caroline Møller Hansen scored the last goal of the game.

The hope is that Milan will work on these mistakes and will work on maintaining their concentration for a full 90 minutes to prevent things like this from happening again.

Vero Boquete scored her first-ever goals in red and black during this game. The goals came at the eighth and sixteenth minutes of the match.

And in one half, she managed to score two more goals than she did during her entire tenure with the Utah Royals.

She also made history, as she is the first Spaniard to score a goal for the Rossonere. And best of all, we got to see her El Pulpo celebration in homage to her Galician heritage after her goals.

Here’s a breakdown of her first goal and just how remarkable it was.

Mária Korenčiová was recently named the Slovakian player of the year and with good reason. During the match against Inter, she demonstrated just why thanks to fantastic saves like this one.

And though the match didn’t end in a clean sheet for her, the score would have been a lot worse had it not been for her heroics. Milan are very fortunate to have her in goal.

Yui Hasegawa played a great match. She kicked things off with an assist to Vero, which led to the Spaniard scoring her first goals for Milan.

She was also a constant threat in midfield when she delivered a direct long-pass to Giacinti, who unfortunately, didn’t convert it.

She also demonstrated her defensive prowess against the Nerazzurre, as she had five interceptions in the midfield for Milan.

The midfielder put in a fine shift during this match and was one of the undisputed standouts as she helped bolster her team to victory.

Just when it seemed like Inter was going to get back into the game, Natasha Dowie stood athwart and yelled ‘Stop!’ to their plans.

And with those two strikes, Dowie held Inter at bay, and Milan went on to win the game.

Not surprisingly, Milan dominated this game and the stats prove it. They had 61% possession and peppered Inter’s goal with thirteen shots.

They also had two corners and two yellow cards, with Valentina Giacinti on the receiving end of one after a feisty encounter with Gloria Marinelli.

The affair was a rather bitter one between the two teams as there were six cards issues and countless fouls doled out. We would expect nothing less in a derby between two rivals.

This aside, the Rossonere put on a dominant display, and the stats confirm this. 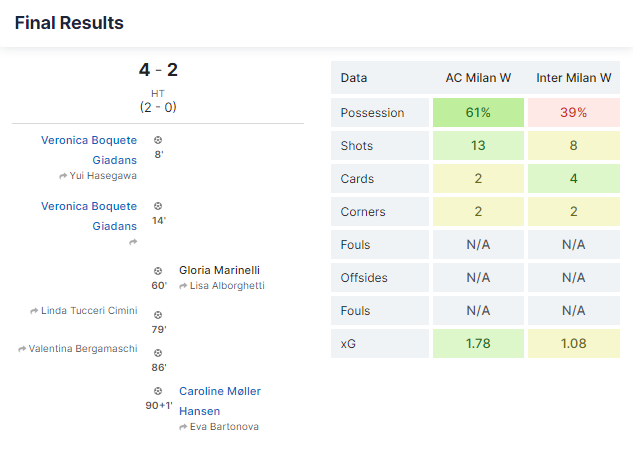 The AC Milan Women will play AS Roma in the Coppa Italia Femminile final on May 30th. AS Roma won their semifinal against Juventus in a thriller that ended 3-2 and Roma progressing to the final on aggregate (with two away goals).

The match will no doubt, be a precursor to the Coppa Italia final. And if they win this match, then they just might have a good shot of winning the final as well.