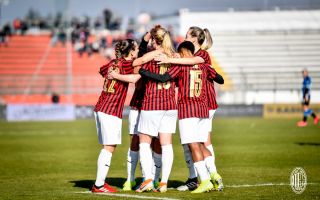 The AC Milan Women beat Inter Milan during the fourth ever meeting between the two sides, in the latest instalment of the Derby della Madonnina.

Milan initially started off the game well. They controlled the majority of possession (55% to be exact) and had the half’s best chances on target.

Unfortunately, Milan wasted most of their chances, with the most egregious of them being when Begić wasted a golden opportunity at the 22nd minute.

She wouldn’t be the only one though, as captain Valentina Giacinti also missed another grand opportunity at the 37th minute. (Sadly, that wouldn’t be her only big miss of the game).

After the halftime interval, Inter would be the first team to get on the score sheet, thanks to a Bartanova strike at the 51st minute.

However, Milan would remain undaunted. They kept pressing for an equaliser and eventually found one at the 69th minute, thanks to Thorvaldsdottir.

Milan would have the chance to put the game to bed at the 72nd minute, after Inter defender Beatrice Merlo received her second yellow of the game, due to having committed a foul inside the box.

Giacinti unfortunately, hit the penalty wide of the target, and a great chance to put the game away was wasted.

Not one to give up however, Giacinti would eventually make up for her miss by scoring the game-winner just six minutes later (’78).

The game ended 2-1 in favor of the Rossonere, and Milan would emerge the victors of this day.

Milan are still in second place, which means they are in a pole position to make next season’s Champions League. They are on level points with Fiorentina and will have the chance to surpass them directly when the two teams meet in late February.

You can view all of the highlights from the gallery of the match here.

Well done ladies! Now it’s onto the next one against Tavagnacco.