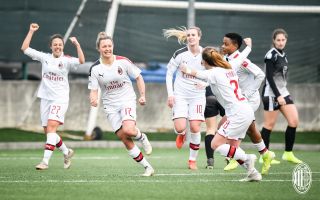 The AC Milan Women beat Orobica Bergamo 1-0, after what was a surprisingly hard-fought match.

Milan did what it, unfortunately, does in games against the ‘smaller’ Serie A teams: they made a complete meal of this game.

It didn’t help, of course, that coach Maurizio Ganz thought that this would be the perfect time to experiment with the Rossonere’s line-up.

In particular, he chose to move Nora Heroum, who is normally a central midfielder, to left-back, in order to give Linda Tucceri Cimini, who normally occupies the position, a rest. In addition to this, he chose to rest starting centre-back Stine Hovland and play Francesca Vitale, who has been filling in as a make-shift right-back this season, in her place.

The experiment had mixed results.

Though Milan had the majority of possession and shots on target, they struggled to breakdown the lowly side from Bergamo. The previously mentioned experimentation with the line-up, along with starting Milan’s two newest signings (Berglind Björg Thorvaldsdóttir and Pamela Begič) meant that the players were not only having to deal with the awkwardness of being played out of position but also had to deal with adjusting to new teammates, and new teammates adjusting to the team.

The team still lacks the prescience and the chemistry needed to be dominant in the middle of the park.

Physical fitness was also an issue as once again, the team looked gassed after their victory against Roma. This was perhaps one of the many reasons why they were unable to score, despite the many chances they carved out for themselves.

There weren’t many bright spots during the first half of the game, but Francesca Vitale deserves a special mention for being one of them. Francesca had a stormer of a match, as she was outstanding as a centre-back. Vitale proved to be formidable alongside Laura Fusetti, as she made quite a few crucial interceptions, contributed to the link-up play, and dribbled around her opponents with ease.

Though Francesca has been doing just fine as an improvised right-back, she absolutely shone as a centre-back. It’s the position she originally played in before Ganz asked her to fill in for the injured Federica Rizza. With this performance, Francesca just reminded us of why she’s one of the best defenders in the country.

Francesca was one of the standouts of the game, along with Refiloe Jane, Laura Fusetti, Sara Tamborini, and Domenika Čonč, who would prove to be decisive in more ways than one.

The game itself just plodded along for over an hour or so and didn’t spring into life for the Rossonere, until Maurizio Ganz finally made a few key substitutions. The first of which, was when he substituted in Linda Tucceri Cimini for Marta Carissimi at the 63rd minute. It was this, coupled with the entrance of Sara Tamborini in place of Sandra Žigić at the 77th minute, that proved to be crucial for Milan. Tucceri’s speed and crossing ability, combined with Tamborini’s velocity and technical ability, allowed the game to be swung back in Milan’s favor. It would ultimately pay off at the 88th minute after captain Valentina Giacinti’s parried shot was turned in by Dominika Čonč.

After this victory, Milan are currently third in the Serie A table. However, they do have a game in hand, and a chance to leapfrog past AS Roma in the standings.

Milan will play their previously postponed match against Pink Bari on Wednesday, January 29th at 12 p.m. The postponement of the match was due to adverse weather (heavy fog).

Here’s to hoping the ragazze can claim all three points on Wednesday.

You can watch the highlights of the match against Orobica down below (and relive all of the sufferings too).

Here’s to hoping their next match against Pink Bari will also be a bit better, and that we won’t have to suffer nearly as much for a win.