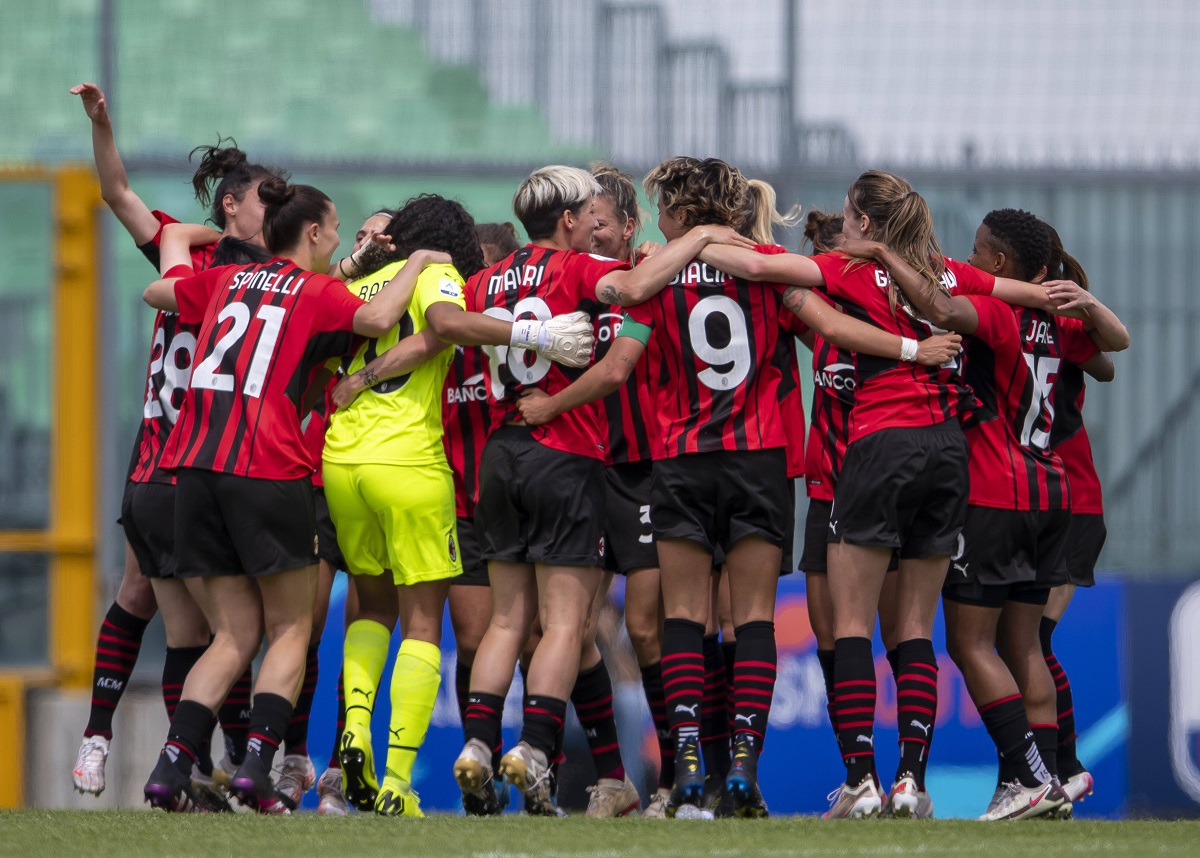 For the first time in their history, AC Milan Women have qualified for the Champions League! The Rossonere secured qualification for the prestigious competition by playing Sassuolo to a nil-nil draw.

Since Milan came into this match with three more points than their opponents (46 in total), all they had to do was tie or win this match to secure qualification. The Rossonere managed to do the former, as they kept Sassuolo’s formidable attack at bay and kept a clean sheet in the process.

Here’s a summary and a few highlights from the match.

AC Milan lined up in their usual 3-5-2 during the match. The most notable differences between this match and the last was the reintroduction of Yui Hasegawa into the line-up and the debut of Selena Babb.

Babb was filling in for Mária Korenčiová, who had been suspended for the match for the red card she accumulated against Fiorentina. The two teams started the game rather cautiously, as both teams knew what was at stake and wanted to avoid any costly mistakes.

The first chance came from Sassuolo’s Santoro, who pounced onto a Hasegawa mistake and fired the goal on target. Fortunately for Milan, Selena Babb parried it away. Sassuolo dominated in the early stages of the game, as it seemed like they pinned Milan into their own half and had subsequent corners. Hasegawa made up for her mistake, however, by making a crucial intervention in front of goal in the ninth minute.

AC Milan began to gradually take control of the game, as they ramped up their offence. At the 25th minute, Hasegawa was set up by Giacinti and she hit the post with a right-footed effort. The Rossonere continued to assault Sassuolo’s goal. At the 34th minute, a diagonal shot by Christy Grimshaw barely missed the goal. Five minutes later, Yui, then forced Diede Lemey to make a save through a shot on target. This was followed up with Grimshaw with a header, and Giacinti came dangerously close again in the 45th minute.

After the halftime interval, the Rossonere came out of the locker room ready and raring. At the 53rd minute mark, Giacinti drew a great save from Lemey as Milan. This is was then followed by a shot from Grimshaw at the 60th minute. In the 63rd minute, Christy tried again to score, as after stealing the ball from Lemey, she kicked a shot towards an open goal but Maria Filingeri saved it with a last-minute effort.

The Rossonere were rattled at the 68th minute, as after Wunderkind Hayley Bugeja’s effort bounce off the post. Minutes passed by, and both Milan and their fans’ anxiety grew, as the game hung delicately in the balance.

Fortunately for Milan, they would eventually get the result they deserve. And after 94 minutes, and a three-year wait, the Rossonere would emerge the victors of this scoreless tie, as they qualified for next season’s Champions League.

As was noted before, the Rossonere debuted Milan’s 2021/2022 kit on the pitch today. They also did so one day before the men will wear them. This is also the first time that a women’s team has done this in Italy. Milan are also the first Italian team to sell their women’s team’s jerseys in their store too.

And the fact that they capped the occasion off with Champions League qualification makes the moment even better.

In contrast to the Rossonere’s previous matches, this is one of the few games where they actually ceded possession. Milan only had the ball 44% of the time while Sassuolo had 56% possession. However, Milan did have more shots than the Neroverde did, as they outshot them by a ratio of 17 to 14.

Perhaps the Rossonere are finally learning that ‘less is more’ and learning to be more efficient with possession. It was also rather fortunate for them that Sassuolo isn’t clinical against the big sides. Otherwise, they would have paid a huge price. 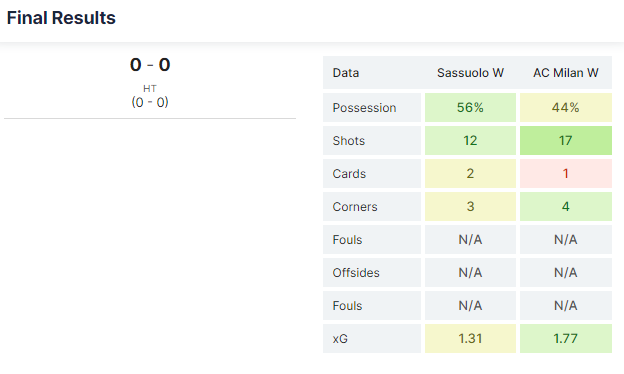 There were a few standouts players in this match. Top honors go to Selena Babb and Yui Hasegawa. Babb did well in-between the posts as she filled in for the absent Korenčiová. She was rarely tested, but when she was, she remained calm and collected and did not break while under pressure.

Hasegawa also deserves merits for her splendid performance. The midfielder was everywhere on the pitch and even contributed to the defense as well. Here’s her crucial intervention that kept Sassuolo out of the net.

Laura Fusetti and Francesca Vitale also deserve to be commended for their fantastic performances, as the two defenders put in a shift in the defense. The two of them bounced back from their recent, shaky performances, and were vital to Milan keeping a clean sheet today.

AC Milan will play Hellas Verona on Saturday, May 22nd. A lead-up to the match, along with the kickoff times and how to watch will be posted.

And on May 31st, they’ll play AS Roma for the Coppa Italia Femminile. After qualifying for the Champions League, the Milan Women will be hungry for more, as they’ll be competing to win their first-ever trophy as well.

Until then, tide yourself over by watching the highlights of the match below.