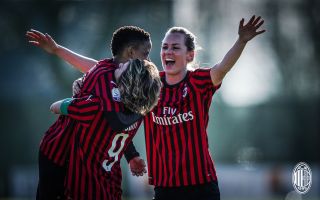 The AC Milan Women will take on Orobica Bergamo on Matchday 14 of the Serie A Femminile calendar. They will play the team this Saturday, January 25th, at 12:00 CEST.

Milan, if you recall, won an absolute thriller against Champions League rivals AS Roma last Monday. If the Rossonere are to keep apace in the race for Europe, they’ll have to beat the lowly sharks from Bergamo to continue their good run of form.

Not much will change from their last game against Roma. Expect Milan to field the same 4-3-3 formation, with the only change coming in the form of who they’ll field in that line-up.

New girls Berglind Björg Thorvaldsdottir and Pamela Begić found themselves starting for Milan, while the ink on their contracts barely had any time to dry. Expect them to take the field for the Rossonere this Saturday as well.

The game against Bergamo will also serve as a way of further integrating the Rossonere’s winter signings into the team, in order to create cohesion and the chemistry needed to challenge the very best that Serie A has to offer.

Here’s hoping the ragazze can walk away from the match with all three points.

The Rossonere training ahead of their match against Orobica | AC Milan

How To Watch: TimVision, Milan TV, and the AC Milan app.