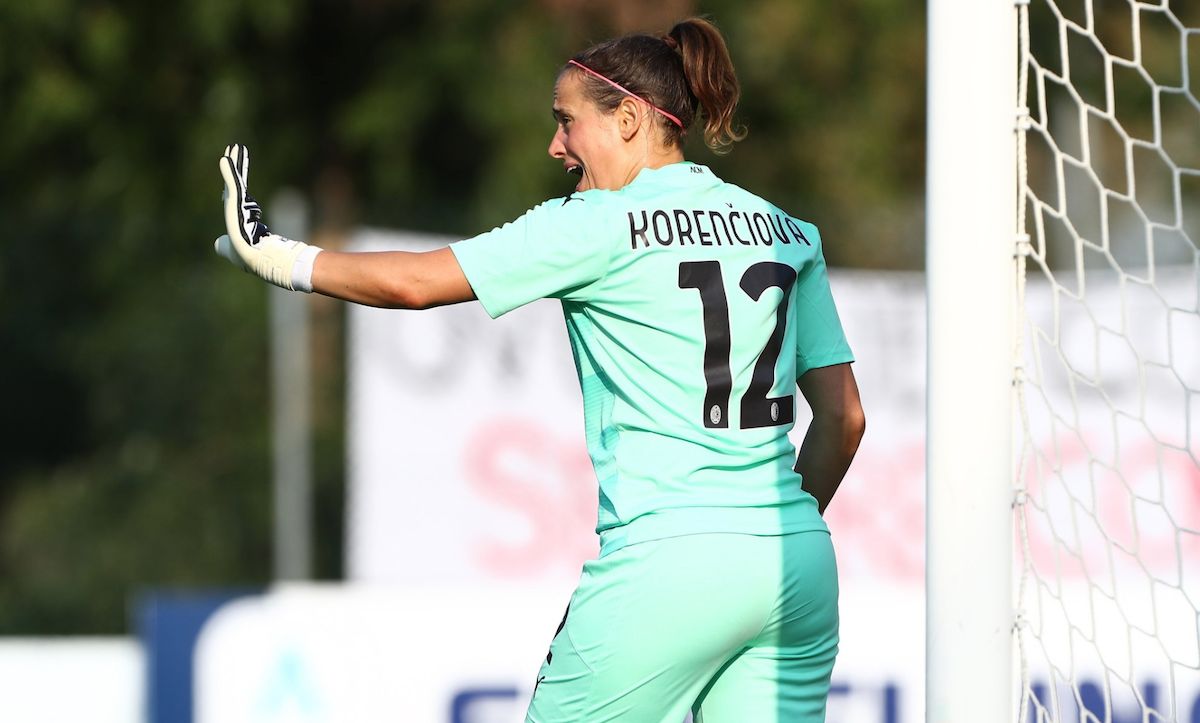 AC Milan Women’s goalkeeper, Mária Korenčiová, was recently voted the Slovakian Woman’s Footballer of The Year. This is the first time she has received this honor.

Korenčiová has had a stellar season, where she’s recorded 111 saves and has registered ten clean sheets (Wyscout). Recently, she did an interview with Sport Aktuality about receiving the honor. A translation of the interview is below.

After eight years of Dominika Škorvánková (midfielder, Montpellier) being the winner, the women’s football throne has a new queen. It is Mária Korenčiová, who became the Footballer of the Year for 2020, and it happened last week. She won despite the fact that she is a goalkeeper, and the awards are always more difficult to win for them compared with the forwards or midfielders.

“Majka”, as everybody calls her, really deserved to win the award. She is an excellent addition to our national team and is the long-term number one for AC Milan, who are one of the best European clubs not only among the men but in the women’s category as well.

Last week, you were proclaimed the best Footballer in Slovakia for last year. Did that surprise you?

“A little bit, although I always anticipated that this would happen and that the odds were quite possibly in my favour to make this happen. The better word in this context, would be that I was more ‘pleased’ than ‘surprised’ by the award.”

Speaking of the ‘surprise’ win, we start with this topic because Dominika Škorvánková has dominated the award for the longest time and she was definitely among the favorites to win it this year as well.

“I understand that and I also see it that way. Dominika has won the award eight times in a row and nine times overall. Everyone, including myself, always expected her to win the award. For the last few years, when I started playing for AC Milan, I’ve been a competitor with Dominika. People, when voting for this award, know the situation and they also understand women’s football.

“It was, therefore, expected that the Footballer of the Year would be either one of us. It would have been a big surprise if someone besides us would have won the award. The younger girls are very eager to win and there are also older players who have had great careers for years and would have deserved an award. Still, [Dominika and I] are both active players and we play in the most famous clubs.”

What do you think was the decisive factor that led the experts and the coaches choosing you as the winner?

“I can’t explain it any other way, only because Dominika moved to Montpellier, which is not as well-known as her previous club, Bayern Munich. She plays regularly and I play on a routine basis, too. Neither of us had any absence due to injury.

“We also have had relatively stable performances in the national team; it is usually not the case that one of us would be incredibly excellent and better than the other or play much better than the other players. I would say in that aspect, what may have been the deciding factor was that Dominika had won the award several times and the voters decided that it was time for a change. Maybe somehow, considering my long career, they decided that I deserved the award this time around.”

Where would you put this award, in terms of your personal achievements?

“Above all else, I see this as an award for my entire career, and not just for last year. In a few weeks, I will be 32-years-old and I have played football since I was nine-years-old; I spent most of my life doing so. I’ve never done anything else for such a long period of time. Therefore, I take this honor as a reward for what I’ve done all my life. That’s why it has such a special meaning for me.”

However, you were not able to receive the award in person. Why was that?

“If I would have come to Slovakia [to collect the award], then returned to Italy afterward, I would have undergone an eight-day quarantine and then take a coronavirus test, which, of course, would have to be negative [before I can play again]. We played a city derby with Inter last weekend and it was totally out of the question for me to miss it.

“Besides, if I do not train for a week in the team practice sessions, then it would be detrimental to my overall condition. There are exceptions for athletes who would not need to quarantine after returning from Slovakia, but they only apply to [athletes who play] matches or for national team events. The exception does not apply to the award winners and when they travel to collect an honor. That’s why I stayed in Italy.”

Was it worth it? Did you help AC Milan achieve a good result against Inter?

“We won the match 4-1, and we overturned the result from the initial 0-1 score line, and I was the goalkeeper the whole match. So, yes, it was very much worth it. Although, of course, I would like to come to collect the award personally and at the same time, be the goalkeeper in the league match. Unfortunately, it is not possible to be in both places at the same time.”

When will you be back here in Slovakia again?

“Next Wednesday, after Easter, the national team will start practicing together. I have been summoned for two matches against Slovenia and Mexico. So I will come to Slovakia next week.“

Now, let’s talk about the clubs for a little bit. AC Milan is in second place in the Italian league, behind the leaders Juventus. What is your opinion on the league?

“We are six points behind Juventus. Every year, we get closer and try to bridge the gap but Juve doesn’t waste time and they progress forward on a yearly basis. It’s getting harder and harder to catch-up. So far, they have won all 16 matches, while we have won 14 matches and have two losses. And both losses were against Juventus.

“We lost the first match to them by 1-0, and it was from a goal that came from a penalty. I did not guess which way it would go at all, and it went in just the opposite direction. A draw would have been more fair, but what can we do about that now, right?

“In the second match, where I was also the goalkeeper, it was a debacle and we lost 4-0. It felt like the end of the world. Our goal is to finish in second place. The first two clubs in the standings will qualify for the Champions League. AC Milan has never played in the competition. We have a five-point lead over the third place Sassuolo. I believe that we will maintain our distance. Although we still have a couple of tough matches to play, we have already played Sassuolo twice for two matches. There are six matches left until the end of the current campaign.”

Let’s look back at last season, which was interrupted by the coronavirus pandemic. How well did your team fare then?

“Juventus received a trophy for the season because they had a 9-point lead before the March break. We and Fiorentina had the same amount of points and we were in second and third place [respectively]. Fiorentina had a better goal difference, so they finished second and then played in the Champions League. Both Italian teams are already out. Fiorentina is out because they lost to Manchester City and Juventus are out after losing to Lyon, who are the best women’s team in Europe.“

There is probably a pleasant atmosphere at AC Milan, as the women’s team is heading to the Champions League for the first time in their history. It also looks good for the men’s team, I suppose.

“Exactly, this is still a topic of discussion among us. Because the coronavirus pandemic is still ongoing, we don’t really get to interact with the men. Zlatan Ibrahimovič also stayed at the club, although his original contract was supposed to end last summer. He is a miracle, a legend, he holds the team together in all matches, but I haven’t had a chance to meet him in person yet.“

Let’s also talk a bit about the Slovakian Women’s national team. In the recent qualification campaign for the Women’s Euros in 2022, we finished in third place with ten points. Do you think it was a successful campaign, in your opinion?

“Kind of. We were placed in the fourth basket in the draw and we slightly differed from Hungary [in terms of coefficient points], who were in the third basket of the draw. All things considered, it was quite a successful qualification campaign. Iceland is one of the world’s top teams, and we lost 1-3 at home, after two goals that from penalties. Until them, we were leading them 1-0. It was probably our best match.

“Every point we have won is very important for the future and to move us to a higher level. The biggest goal is, of course, to advance to the Euros. Just playing the playoffs would have be a great success; it would have been amazing.”

[Author’s note: Slovakia didn’t qualify for the playoffs for the Women’s Euros.]

What do you think about the current performances and results of the Slovak men’s national team?

“It is difficult for me to assess it. We should not sugarcoat it; the results are bad. I’ve seen matches and I feel like there’s something wrong there. I am not one to judge the situation from an outside perspective because I do not know what the situation is like on the inside. Anyway, we have to win matches and not drop points against an opponent like Malta. I think that says it all.”

Credit goes to Miriama O. for the translation.