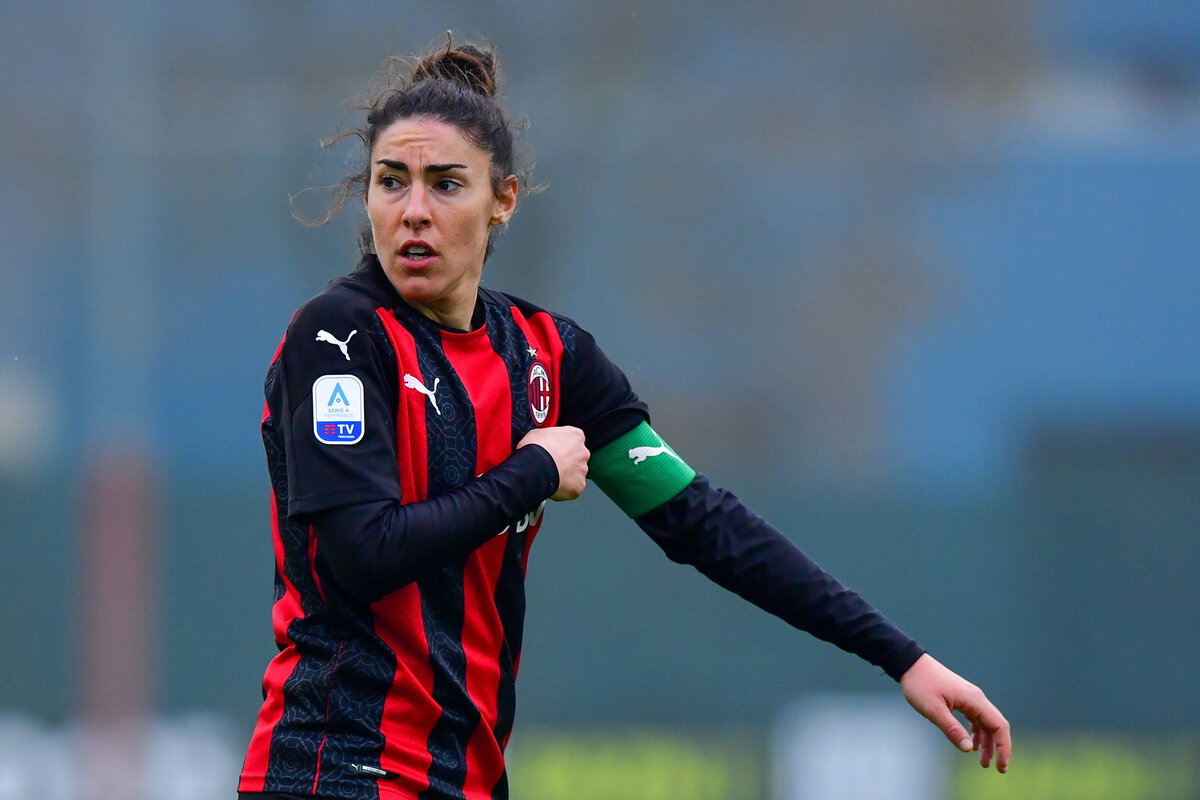 AC Milan’s vice-captain, Laura Fusetti, recently conducted an interview with Milan TV, as cited by MilanNews24, in which she touched on several interesting topics.

Among other things, she spoke about the upcoming derby against Inter, Milan’s season so far, the team’s mentality and her admiration for the former FC Barcelona captain Carles Puyol.

She also revealed that she asked Franco Baresi for permission to wear the number six on her shirt, and how much she admires the former Milan skipper.

The season is about to enter a decisive phase, what is the atmosphere like inside the locker room?

“We have entered the most important phase of the championship, and we must maintain second place and try to bring home as many points as possible. Our main goal, in fact, is to qualify for the Champions League.

“The victory over Empoli has certainly helped us find peace and the atmosphere of the locker room is very good. We must continue down this path, be united and give our all, just as we have always done before. If we continue to do this, then we will be able to reach our goals and find satisfaction in this.”

“The reasons for this are pretty solid, and it’s because we care a lot about qualifying for next season’s Champions League. It’s also because we didn’t qualify last year, as we lost out due to goal difference, after the league was suspended due to the pandemic.“

How do you feel about your season so far?

“There is always something to improve and I always try to do my best to help the team. If I am totally satisfied on a personal level, I will say it at the end of the season. We are certainly doing a good job in this regard, as we have the second-best defence [in the league].

“We want to do well and try to keep the momentum going; and why not improve upon it? If we [the defence] can exude more confidence, then the rest of the team can play with more calmness as well. In general, we still need to improve upon some aspects but we are having a great season.”

One of the new tactics for this 2020/21 season was the implementation of a three-player defence: how do you feel about this module?

“I feel good about it, as even when I was at Brescia, I played in this formation. It [the formation] gives us the opportunity to cover more ground and at the same time, it allows us to attack when the situation allows it. Furthermore, the 3-5-2 enhances our individual characteristics as players.”

It’s Derby week, are you fired up?

“It is an important match for the championship, and the derbies have always been very emotional games, and not just for those that play them. These are games that you don’t need to get hyped up for because you always want to play them.

“Having said this, we will meet Inter on Sunday, but after that there will be other matches, all of which are important as they will all be played like finals.”

Inter beat you in the first leg of the semi-final of the Coppa Italia, will ‘revenge’ in the league have any bearing on how you’ll play in the return leg?

“We lost in the Coppa Italia, and Inter are a good team with strong, individual characters. We will, therefore, have to be even more focused, and fight for every single ball so that we can prove our worth. Winning on Sunday means having more momentum for the return leg [of the Coppa Italia Femminile].”

You have been here since the Rossonere’s inception. How much have the Milan Women grown over the years?

“The team has grown a lot, especially in terms of mentality. Even if we are not yet professionals at the legislative level, we feel like real professionals and the club treats us like we are pros. We feel the importance of wearing this jersey and the important values of the club ​​have been instilled in us, starting from the affection for the team’s colours.”

Going back to this last question, how much room for improvement do you think the team needs?

“A lot, and also because most of the players arrived this season. The more you play together, the more you’ll find the right chemistry.

“Some of the team members have arrived in the summer: Vero arrived in November, and Hasegawa arrived in late January. Having a sense of continuity and learning to know each other while playing football, as each player has their own technical skills, is an added bonus for the whole group.”

About Franco Baresi and Carles Puyol, with the first player, you asked them for permission to wear the number six on your shirt, and the second is your idol: what inspired you to become a central defender and what do you like the most about this position?

“Maybe not everyone knows this, but I started off playing as a midfielder and to make up for my absences that were caused by injuries, I changed my position and became a central defender. It’s a role that I really do like. You are the last barricade before the goalkeeper and your job is to bring security to the team.

“My idol is [Carles] Puyol, a champion on and off the pitch. He is gritty, he puts his soul into everything and never overlooks an opportunity to help his teammates.

“As for Baresi, it is an honour for me to wear the number six in honour of a great defender and captain. My only regret is that I didn’t see many of his games live because I was a little child at the time. Having him by our side today and playing with his jersey number is a wonderful thing.”