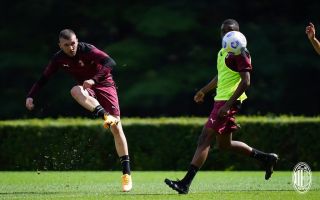 The AC Milan squad continued their preparations for the 2020-21 season at Milanello on Sunday, albeit starting late due to a storm.

The club’s official website have revealed that, after muscle activation in the gym, Milan moved to the raised pitch to play a match (three periods of 15 minutes each) which the senior squad against Federico Giunti’s Primavera, who were “supplemented” by some First Team players.

The final result was 4-1 to the senior side thanks to goals scored by Alexis Saelemaekers, Pierre Kalulu, Ante Rebić and Lucas Paquetá. For the Primavera the only goal was scored by midfielder Alessandro Sala.

Paolo Maldini was also present at Milanello. Despite the fact that the Milan technical director is very busy with transfer market negotiations, he is trying to stay as close as possible to the squad.

Training will continue at 15:00 CET at Milanello on Monday, where it is possible that Zlatan Ibrahimovic could be put through his paces for the first time since his return.