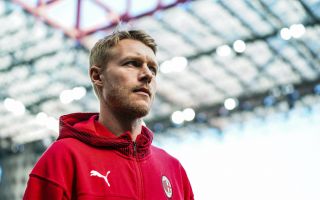 The agent of Simon Kjaer has once again confirmed that his client wishes to remain at AC Milan beyond his loan spell.

The Danish international arrived back in January on a loan deal until the end of the season from Sevilla having spent the first half of the season at Atalanta where he struggled for game time.

We recently outlined how there are four factors which work in favour of Kjaer regarding making his stay at San Siro a permanent one including his price tag and the element of experience he has brought to the club his his arrival.

Recently, the player’s agent Mikkel Beck spoke to MilanNews about his client’s future and the chances of a stay at Milan beyond the summer, insisting he wishes to remain.

Now, Beck has confirmed to SportMediaset that the player will remain with the Rossoneri until the end of the season after agreeing a contract extension, and hopefully beyond.

“Milan and Sevilla have reached an agreement to extend the loan with the right of redemption until the end of the season,” he said (via MilanLive).

“Kjaer sees his future at Milan and the Coronavirus situation has not changed his perspective. He is doing a fantastic job in the Rossoneri with excellent performances and good results. The team has improved since he arrived in January and the way the fans welcomed him has been extraordinary.”