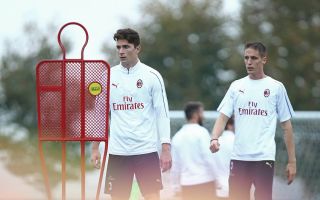 The agent of AC Milan defender Mattia Caldara has dropped a strong hint that his days at the club are numbered.

Caldara was loaned out to Atalanta during the January window in 2020 with the formula of an 18-month loan plus an option to buy, but after an injury-riddled spell La Dea have decided not to exercise that option and therefore Caldara has returned from Bergamo.

The central defender returned to Milanello after the loan and Milan are set to evaluate him during the summer retreat which started on 8 July. Caldara has a contract that binds him to the Rossoneri until June 2023, it is worth noting.

Now his agent Beppe Riso has spoken about the future of the former Juventus man during an interview with TMW, and while he stopped short of saying his client is destined to depart, he very strongly hinted that he is working to find a new club for his client.

“He is at Milan and in a couple of weeks we will do some evaluations. There are important and newly promoted clubs, let’s see. It’s a choice whether to go and play 38 games or go and play it somewhere else,” he said.