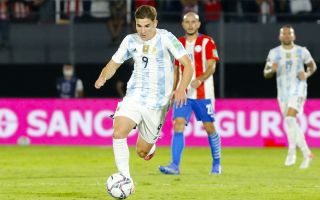 Agent of River Plate star responds to Milan and Inter links: “He would be happy with Ibrahimovic”

The agent of River Plate forward Julian Alvarez has confirmed his client would be happy to play alongside Zlatan Ibrahimovic at Milan amid recent links.

Calciomercato.com reported recently that Milan have been watching the Argentine for some time and made an enquiry but were met with a demand from the Buenos Aires club of €25m, which is the release clause built into his contract.

The added that Bayer Leverkusen, Tottenham, Ajax, Real Madrid, Sevilla and Borussia Dortmund are all keen, as well as Derby della Madonnina rivals Inter, and that it has been established Alvarez can actually leave for €20m meaning his asking price has dropped.

Now, his agent Fernando Hidalgo has spoken about his client’s future during an interview with FCInterNews, and he confirmed that the idea of a move to Milan to join up with Ibrahimovic or finding compatriot Lautaro Martinez at Inter would be happy.

“If Inter and Milan are interested? I don’t know, neither of them called me. Comparison with Milito? Each player has his characteristics. Julian like Diego has an excellent ball possession, he is technical, with good feet. He can play as first or second striker, but also outside the area. He is a very complete player, one who really advances every day, tries to improve, who likes to learn, is top of his level, he will develop new things,” he said.

“All the European clubs go to Brazil and invest in very young players without asking if they are ready or not. Here in Argentina they think they are not ready, they ask a lot of questions and make offers for the percentage of the card.

“So when they make the decision to bet on Alvarez it may be late or they will pay double what they would have paid a year earlier. Alvarez already has two years behind him in the first division with River Plate, which is a big club, where you live the pressure. Julian is already at the right level for any top team in Europe.

“It is a matter to be discussed with the club, it is not me who must make the price, it is up to the club. We will make a good negotiation, if an important offer arrives, otherwise he is happy to stay at the River.

“I don’t advertise for Inter, he would be happy with Ibrahimovic, with Lautaro or with some champions in England. The important thing is that a serious club arrives.”