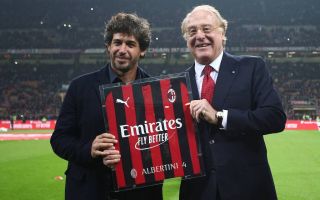 Ahead of the crucial encounter against Lazio in the capital, former Milan and Italy midfielder Demetrio Albertini urged the Rossoneri to not look over their shoulders as the season nears its climax.

Milan face Lazio, sitting just one point ahead of Atalanta and Juventus, who are tied on 65 and three points ahead of fifth-placed Napoli.

Speaking to La Gazzetta dello Sport (via Football Italia), Albertini said: “Fear increases if you look over your shoulders. The first thing to dominate is anxiety and fear of the opponents. Milan must be aware they are a united group who believe in what they do.”

He further spoke in reference of one of current Atletico Madrid boss’ books.

“I’ve read Diego Simeone’s book and he explains the best side doesn’t always win. Instead, the most prepared one and the one that believes more in what is doing can often succeed.

“I don’t know which problems Milan have, but big sides can reach their target if they handle negative moments well. Lazio must win if they want to keep their qualification hopes alive.”

He also gave his thoughts on who he would prefer in the centre half of the pitch between Sergej Milinkovic-Savic and Franck Kessie.

“If I have to choose, I say Milinkovic, but it depends on the budget. He has the characteristics of a champion. I’ve always liked Kessié too. The first one is a talent, the second one is more solid. Kessié remains vital for Milan and he would be so in many other clubs,” he said.

Ibrahimovic sits out injured against Lazio, but Albertini says the team should not resort to excuses without their veteran striker.

He said: “Excuses are the antechamber of defeat. I don’t think Milan players think about how much his absence. Mandzukic brings experience, even if it’s unclear how long he can play.”

Milan and Lazio come into the clash after losses against Sassuolo & Napoli respectively.