As a 30-year-old who has racked up tens of appearances for the Italian national team and over 200 appearances for Roma, he is perhaps not so much of an unknown quantity as some of the names that have recently arrived.

Nonetheless, after loan spells with Valencia and Paris Saint-Germain, Florenzi returned to the league he knows best looking to find himself again, and here is what Milan can expect from the full-back…

Florenzi started his professional club career with Roma in 2011, but spent the 2011–12 season on loan with Crotone where he was able to get some senior minutes for the first time, before breaking into the first team with the Giallorossi.

After establishing himself as one of the first names on the team sheet over the next few years, he was appointed as Roma’s new captain following the departure of Daniele De Rossi in 2019.

However, things then went pretty quickly south as Florenzi left his boyhood club, firstly on a loan with option to buy deal to Valencia, and then under the same terms to Paris Saint-Germain, winning the Trophée des Champions and the Coupe de France with the latter during the 2020–21 season.

Florenzi has been part of the Italy setup since 2011 when he was just 20 and was in the U21s, finishing as a runner-up in the 2013 UEFA European Under-21 Championship, and also represented the Italy senior side at UEFA Euro 2016 and UEFA Euro 2020, winning the latter tournament.

As evidenced by the stats on Transfermarkt, Florenzi is a player who can play anywhere on the right. He can play as a Mezzala, as a right-back or as a right winger, also capable of playing as a wing-back too.

Florenzi is not a player who involves himself a lot in the build-up play. Even when he played as a winger for Roma under Eusebio Di Francesco, Florenzi was that winger who would stay wide but not too close to the touch line.

One of Florenzi’s main jobs was to engage the full-back/wing-back of the opposition and allow the Roma full-back to overlap or underlap, rather than being a direct threat himself.

He has a few deft touches in his pocket which helps his team evade the press but it must be remarked that he isn’t the greatest dribbler.

In terms of passing Florenzi prefers more of the ‘keep it safe’ approach rather than going for a cross. He is good for switching the play from one wing to another when the press gets too horizontal. This is a very ideal trait for Milan to have.

Florenzi also has a good cross in his Arsenal and with a proper No.9 to aim at in Giroud and/or Ibrahimovic – this gives Milan a different dimension coming from the right especially if the opposition defend deep.

As a right winger Florenzi likes to make runs behind a ball playing No.9 while the striker likes to hold up the ball waiting for the midfielders and wingers like to make runs

He is always available as a passing option to his team-mates who are getting pressed. In terms of pace and dribbling and taking his man on and beating him, Florenzi lacks that ability to be explosive.

Florenzi is someone who doesn’t dive into tackles which is a great trait for a defender. He likes to get close to his marker and put pressure, and this makes him less prone to quick turns but gives way to combination play.

In terms of the press, his contribution to cover shadows under Tuchel makes him very used to the pressing system Pioli is trying to enforce at Milan.

Florenzi is tactically aware. He covers the half spaces left by the full-backs when playing as a right winger, which certainly makes his versatility useful.

The stats show Florenzi for what he is: a quick, versatile energetic and hard-working player who adds a lot to any side both in the possession and non-possessive phase.

As a winger he is a hard worker as his pressures show, while his vision is represented by the fact he is a constant in the 3-5 assists per season range. He even amassed 10 goal contributions in the 2015-16 Serie A campaign, with 7 of them goals. 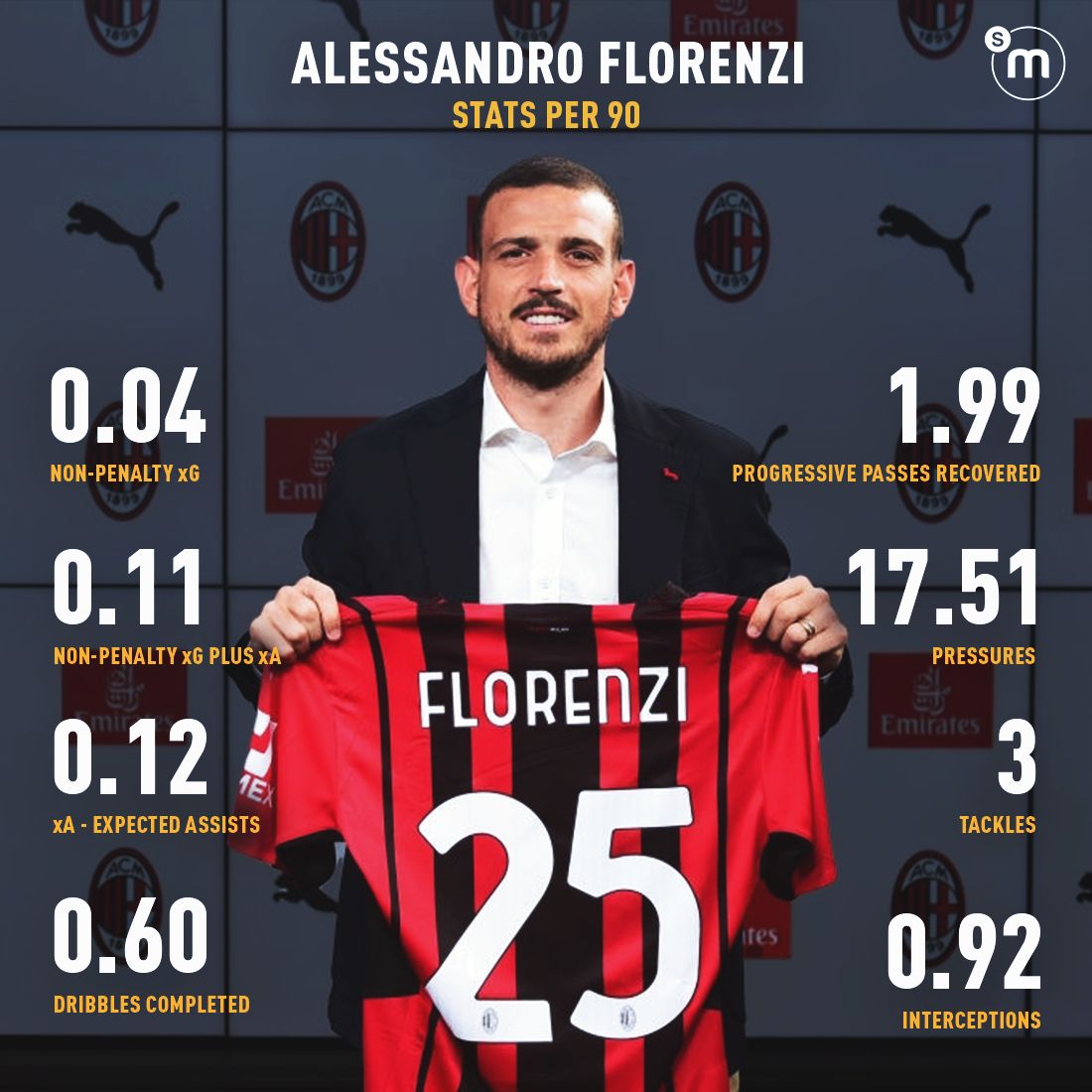 Florenzi comes in with a wealth of experience to one of the youngest teams in Europe. As somebody who can back-up to Calabria and Saelemaekers, Florenzi is a decent deputy especially with the formula of a loan with option to buy.

His big downside is that he is injury prone and this has limited his effectiveness, especially in terms of physical ability.