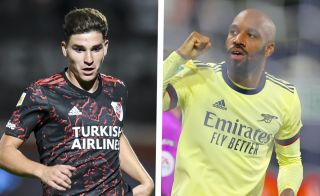 CM: Milan not excluding striker signing in January – the names from Alvarez to Lacazette

Even though the majority of speculation is surrounding the defender that AC Milan will sign in January they could also recruit a new forward next month, according to a report.

According to Calciomercato.com, the headlights are ‘also focused on the attack’ given how much injuries have affected the depth available to head coach Stefano Pioli already this season. The idea of a new signing is being evaluated and there is no shortage of names.

There are two players named ‘Alvarez’ who are on the list – namely Julian and Agustin of River Plate and Penarol respectively. Julian has been in the Rossoneri’s sights for some time but the competition has gradually increased with Juventus, Inter, Atletico Madrid and Barcelona the most concrete dangers. The 21-year-old also has a €25m release clause which will also be in the renewal of his contract.

Regarding Agustin Alvarez, at the beginning of December a meeting was held at Casa Milan with his agent – Edgardo Lasalvia – to discuss what could be a signing for the future given the 20-year-old’s impressive record in Uruguay.

The idea of going back in for Luka Jovic of Real Madrid cannot be ruled out but it remains a less convincing idea at this stage than the aforementioned South American duo, with the hypothesis of signing Alexandre Lacazette from Arsenal is also now unlikely given Aubameyang is heading for the exit.

Everything revolves around Pietro Pellegri in January and an agreement could be sought with Monaco to transfer the loan to another club that would guarantee him get more playing time. Torino and Genoa have already taken an interest, but there is currently nothing more advanced. The exit of Pellegri would open the doors to a new entry.