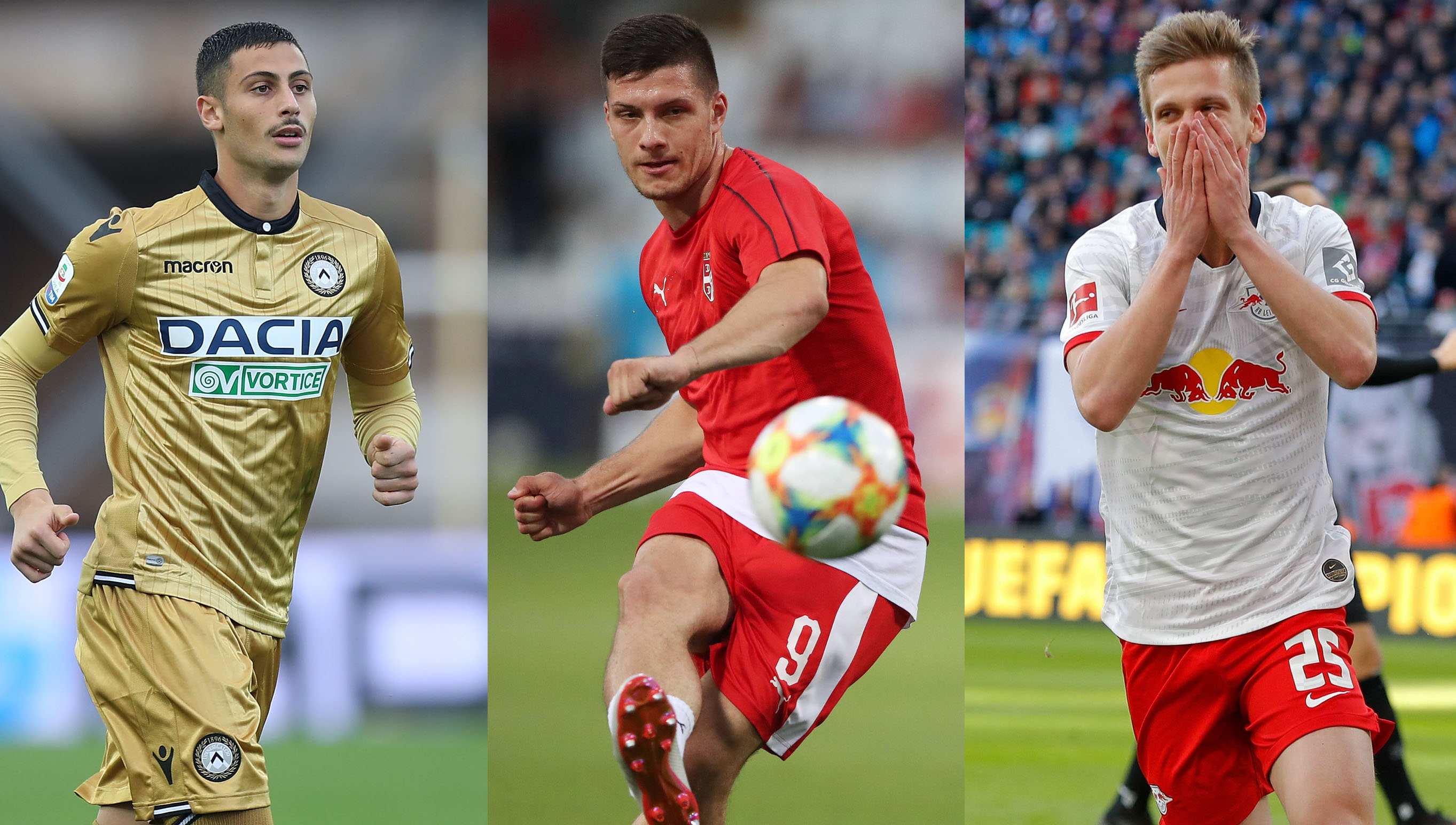 Media speculation is in overdrive at the moment with so much uncertainty regarding the future of Milan, but most outlets believe Ralf Rangnick will be the man to lead the club into a new era.

An interesting report emerged on Tuesday when SportMediaset made the claim that Rangnick has already drawn up a shortlist of targets for if he joins Milan – be that as a head coach, a sporting director or both.

They stated that there are as many as six names that could be part of the possible shopping spree, with it understandably being a Red Bull heavy list.

Here we take a look at each player and whether they could be considered a good fit for the ‘new Milan’ under Rangnick, a manager who prefers a high-intensity, youth-oriented approach to football…

Upamecano will not be an unfamiliar name to most Rossoneri fans as he has been repeatedly linked with a move since last summer, even before the Rangnick rumours gathered steam.

The France U21 international is one of the most highly-rated young defenders in the Bundesliga and has made 29 appearances in all competitions so far this term. He is considered a pupil of Rangnick as he moved from Salzburg – another club in the Red Bull football empire – to Saxony in 2017.

In terms of playing style, Upamecano is a quick and aggressive centre-back who likes to push up and pressure opponents in order to interrupt their attacks, as is Leipzig’s pressing style. He is by no means bad in the air either despite not being the tallest, and in that sense he could be an ideal partner to Alessio Romagnoli.

“I watch Varane a lot and definitely try to learn from him, but I don’t want to play exactly like him,” Upamecano has said previously. “Players have to find their own style if they are going to be remembered.”

The asking price may be a problem for Milan as the 21-year-old apparently has a release clause of €60m built into his current deal, but if that could be brought down in any way then Milan may have a long-term partner for Alessio Romagnoli sorted.

Another name who Milan fans will likely be familiar with is Dani Olmo, who supposedly snubbed a move to the San Siro in January in favour of joining the Rangnick-spearheaded Red Bull empire in Leipzig.

Olmo apparently cost Leipzig €20m plus bonuses but has not settled in perfectly, and there are rumours he is already unhappy with his playing time with the European Championships beckoning next year.

Milan are in dire need of quality and offensive production on the wing, and signing a quality wide man – one who can play on either flank – could allow Ante Rebic to move more centrally, or at the very least will provide much-needed competition to both Rebic and Samu Castillejo.

Dani Olmo's first @RBLeipzig_EN goal still has them in the hunt, but they're running out of time ⏱️#DFBPokal #SGERBL 2-1 pic.twitter.com/0UYHVzr1dW

At Dinamo Zagreb, Olmo was most often used in a central-midfield pairing but could also play the No.10 role too, showing his versatility. As Total Football Analysis notes, “One of Olmo’s biggest strengths lies in his ability as a passer of the ball. He plays twice as many passes forward per game as he does backwards passes and has a terrific range of passing too.”

Milan are sorely lacking creativity and incision as well as sound decision making skills in games against teams who play a low block and look to frustrate. Olmo could provide exactly that, but the price he would command remains to be seen, and it would raise question marks about the likes of Lucas Paqueta and possible even Castillejo.

Dominik Szoboszlai is probably the player on this list who has been most concretely linked with joining the Rossoneri over the past few weeks, with Tuttosport reporting that CEO Ivan Gazidis has sanctioned a €20m bid.

The Hungary international has actually played left midfield, central midfield and right midfield so far for Salzburg this term, and with four goals and seven assists in 29 games he is beginning to attract interest from a number of top European clubs.

It is with good reason too: the 19-year-old looks quick, dynamic, powerful and exciting – exactly the kind of player that the right project and system could be moulded around with time and patience.

His technical ability, decision making on the ball, passing range and vision seem to suggest that he could be deadly in a 4-2-2-2, a 4-2-3-1 or even a 4-4-2, depending on what Rangnick has in mind.

Like with Olmo, his arrival could see him deployed in a midfield pairing, as a No.10 or even on the left side – his natural position – to allow Rebic to move closer to goal. With Theo Hernandez also providing attacking threat down the left side and Szoboszlai aware of defensive responsibilities, it could be a perfect and exciting combination.

Mandragora is perhaps the most interesting on the list from a logistical standpoint. The 22-year-old apparently set to return to Juventus who will exercise their buy- backoption and bring him back to the Allianz Stadium for a fee of €26million, but only if there is a pact with another club which would see him sold on.

The Napoli-born midfielder has three goals and three assists for Udinese across the league and cup this season so far, and tends to play a deeper-lying role which suggests he is being lined up as a possible partner for Ismael Bennacer if Sandro Tonali is out of reach.

What a goal by mandragora; goal of the day so far! pic.twitter.com/V2UwKdRIsc

Mandragora is a tenacious midfielder and has been since his days breaking through with Pescara in Serie B. He never shies away from a tackle, and in many ways is like Tonali in his ability to break the lines with passing and showing ability to win the ball back and start attacks quickly – though arguably neither are polished yet.

A worry could be that he is predominantly left-footed when Milan could do with a right-sided defensive midfield, and in truth Mandragora is somewhat of a wild card. However, if Rangnick wants him then he should be trusted.

It feels like Mario Gotze needs little introduction. He is one of those players who has had his name in the upper echelons of German and world football for the best part of a decade now, but has seemingly reached an interesting crossroads in his career.

Reports in both Germany and Italy claim he wants a new adventure in Serie A, something which is heavily influenced by his partner’s job as a model, with Milan linked as well as Lazio and Roma.

Gotze’s track record of attacking production is outstanding. He has made 217 appearances for Dortmund in all competitions, amassing 45 goals and 61 assists in that period, as well as 60 combined goals and assists for Bayern Munich in 114 games – and he scored the World Cup winning goal in 2014 for good measure.

Despite this, the 27-year-old represents a gamble. There are doubts over his fitness, he currently has a huge salary and is not the typical mould of player that Rangnick – who tends to prefer young, intense players who press high constantly – deploys as a No.10.

For that reason, we think there are better options like perhaps Gent’s Jonathan David, Racing Club’s Matias Zaracho, Fiorentina’s Gaetano Castrovilli or even sticking with Lucas Paqueta.

Numerous reports over the last week have suggested that Milan are set to turn to Real Madrid striker Luka Jovic to bolster their attack if Zlatan Ibrahimovic leaves.

Jovic is a player Rangnick knows very well due to the fact he scored 25 goals in two seasons in the Bundesliga with Eintracht Frankfurt, forming a devastating partnership with current Milan winger Ante Rebic and fellow forward Sebastian Haller.

That persuade Los Blancos to part with €60m to sign him, but he has not hit the ground running, so Milan have smelt blood and believe they can get a deal done.

There is absolutely no doubting that the Serbia international is a quick and instinctive centre-forward who knows how to find space and provide a lethal finish when presented with opportunities.  In addition, he is happy either up front on his own or with a strike partner, and he works hard despite his reputation as a poacher.

It is important to note the concerns though, firstly that he would likely either cost a lot or not arrive on a favourable deal (such as one with a buy-back if he performs), and secondly that he appears to be a confidence player like Krzysztof Piatek was – and that didn’t end well. Nonetheless, if he were given patience, time and most important good service, he could easily regain form.