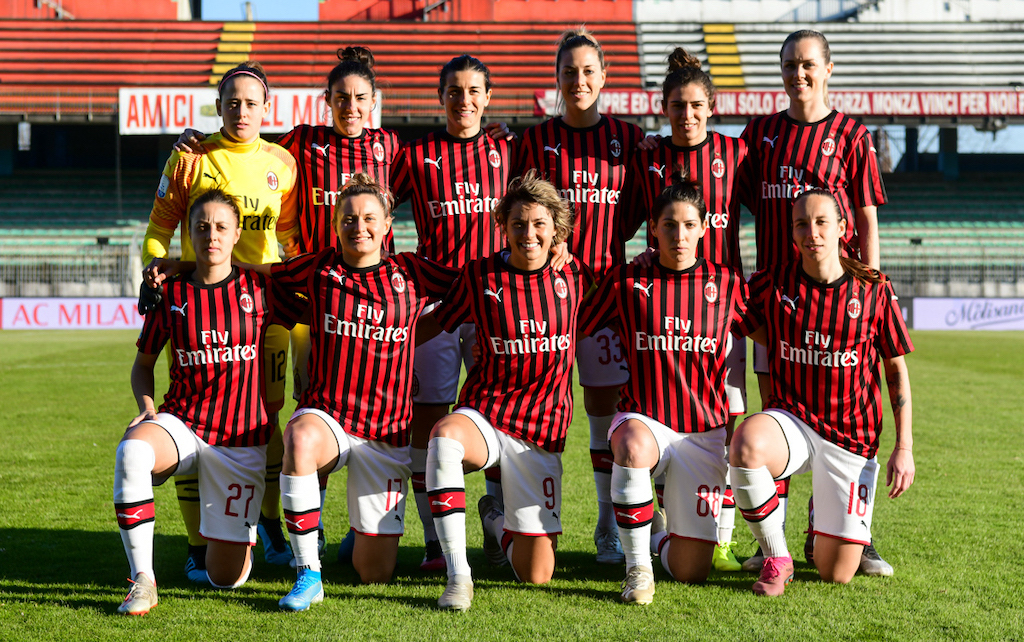 The next season Serie A Femminile will begin on August 22nd. The AC Milan Women will play their first match of the season on August 23rd, against Florentia.

As a primer, let’s take a look at a few of the key stats for the Rossonere from last season before the new one begins.

This will help us understand just how well Milan did last season, and look at areas where they can improve.

Part two of this preview will be posted fairly soon, so stay tuned! 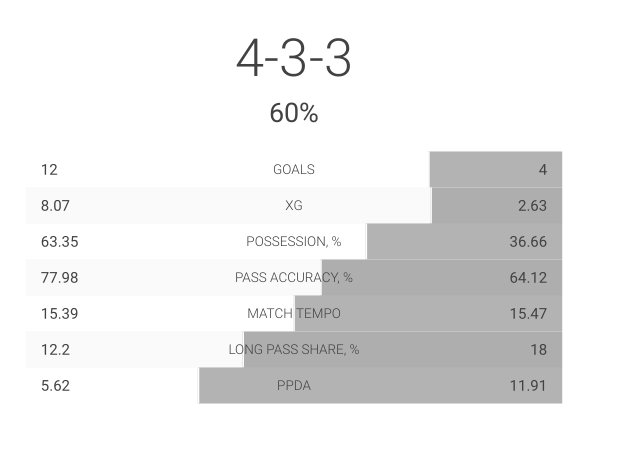 This system allowed the team to dominate centrally while using its wide forwards to attack and occupy the spaces between the centre-backs and the full-backs.

In particular, Milan would rely on the technical ability of their midfield to dominate possession while utilising the speed of players like Valentina Bergamaschi on the wings as they stretched the opposition and created scoring opportunities.

The formation was quite effective early on in the season, as it allowed the team to record a 3-0 victory over AS Roma and to register another memorable victory against their crosstown rivals Inter.

Milan only switched to a 4-3-1-2 in the latter half of the season. This was done for a variety of reasons, with the main catalyst being an attempt to breakdown the smaller teams who tended to sit behind the ball.

Alternating between the formations has had mixed results for Milan. The switch to a 4-3-1-2 allowed them to record a 3-2 win over Roma, but their inability to score against the ‘smaller’ teams remained. This was evident by their 2-1 loss to Empoli (where they deployed a 4-1-4-1 formation).

Look for the Rossonere to vary their tactics and to alternate between all three formations next season.

Milan scored a total of 35 goals, which put them fourth-top in the table in terms of goals scored. The player who scored the most was unsurprisingly Valentina Giacinti. The Milan captain scored eight goals while her namesake, Valentina Bergamschi, registered seven assists for the team.

The team was also second in the league in terms of shots taken, as they averaged 14.38 shots per game. Milan had thirteen different goalscorers throughout the season, which is a stat that puts them on par with Juventus.

The team also had a rate of 1.90 expected goals per game, and that made them above average in this regard in Serie A Femminile.

The only flaw in the Rossonere’s attacking play was their inability to score against teams who sat deep and played a low block. This is something they’ll need to work on, and given the firepower they brought in during the off-season, they just might have what it takes to overcome this deficit.

Milan conceded 15 goals last season and had the fourth best defense in the league. This was in large part thanks to the partnership between centre-backs Stine Hovland and Laura Fusetti.

Hovland was a stand out in this regard, as the defender registered a number of notable stats for the team, including winning 66.7% of her aerial duels. This contributed to Milan’s overall stats in this regard, as Hovland’s height and technical ability helped the team win 49.1% of their aerial battles.

Francesca Vitale and Linda Tucceri Cimini also played their part in maintaining Milan’s defence. Vitale was one of the standout performers of the last term, as the versatile defender won 56% of defensive duels. She also adapted well to playing at right-back, despite never having played in that position before.

In spite of how strong Milan’s defense was, they did have a few chinks in their armour. The expected goal rate against them was also above average at 0.78 per 90 minutes. Milan, however, did prevent any truly dangerous shots from being converted thanks to the strength of their back line.

We can see an example of this here as two of the Milan players would double up on the oncoming attacking player, forcing them to hastily pass it to their teammate, before Laura Fusetti intercepts the ball and sends it upfield.

Milan are good at disrupting an opponent’s play and pressing in order to win the ball back. However, if there’s any area where Milan needs to improve, it would be to let less goals in – but that almost goes without saying.

This is something that will hopefully be addressed next season, as coach Maurizio Ganz seeks to plug the leaks in his ship by using the new signings at his disposal.

4. Control of the ball

The Rossonere averaged a total 58.5% in possession per match. The stat means that the team were the second best in the league in maintaining possession, right after AS Roma.

They weren’t, however, the best at passing the ball, as Juventus holds that distinction. Milan were fifth in the table for passes completed. Milan’s completed an average of 75% of their passes (406.06 per match) compared to Juventus, who completed 80% (469.12) of theirs. What can be concluded from this is that though Milan is great at maintaining possession, they need to be more effective at passing the ball.

Former centre-back Stine Hovland was a standout performer for Milan in terms of passing. The Norwegian was eighth in the league for passes completed, as she completed 57.37 (83%) of her passes during matches.

She also completed 10.88 (52%) of her passes to the final third, which made her seventh in the league for that stat. It also means that Hovland played an integral part in Milan’s build-up play last season.

Hovland has also, unfortunately, left Milan. Her absence at the back will surely be felt. However, the Rossonere has found an adequate replacement in Laura Agard, and look for her to impress during the upcoming season.

Milan’s starting left-back, Linda Tucceri Cimini, was one of the best players for the team during last season. One could even argue that she was the most valuable player.

The defender played a total of 1210 minutes and was a vital cog in their defensive machine. The fullback won 64.4% of her defensive duels and recorded 36 clearances for the season. She also scored two goals and registered three assists.

Her most memorable assist came against Juventus, mainly because it earned Milan a vital point against the Bianconere.

Stats don’t tell the whole story though, as how integral she is to the team can’t be measured solely in numbers.

Her experience and skill set make her an integral part of Milan’s team, and if Milan are to have good season, it will be in large part, thanks to the effectiveness of Linda Tucceri Cimini. 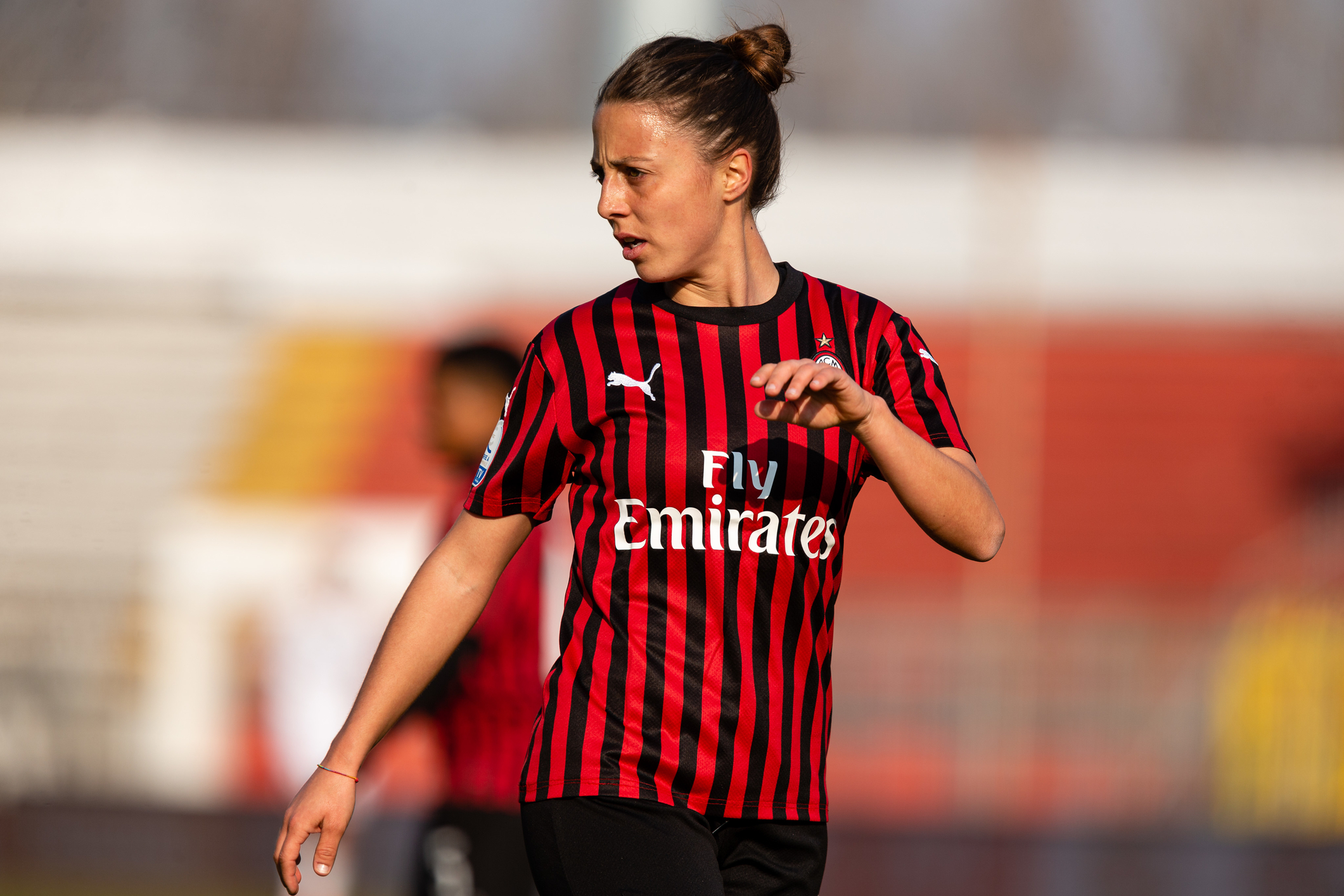 Though Milan had an impressive second season, the season, unfortunately, ended in bitter disappointment for the team. The main reason for this being that it was cut short due to the ongoing COVID-19 crisis. The second reason was that the team failed to meet all of their objectives, with the failure to qualify for the Champions League being chief among them.