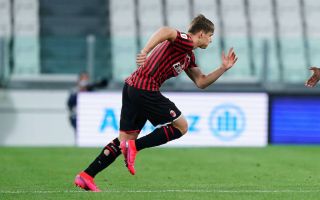 Stefano Pioli has already handed Primavera products Matteo Gabbia and Daniel Maldini their senior debuts this season, and when Milan visited Juventus for the second leg of the Coppa Italia semi-finals, it was time for another academy product to live out his dream of playing for the Rossoneri in Lorenzo Colombo.

Naturally, if you don’t follow the Primavera, the name Lorenzo Colombo will likely not mean much but fear not, we’re here to fill in the blanks. So, who is he?

Born in Vimercate in the Lombardy region, approximately a 40-minute car ride outside of Milano, Lorenzo Colombo has been with Milan’s Primavera since the beginning of his footballing career.

Colombo has quickly risen through the Primavera ranks, leaving major impressions in every youth set-up he’s been a part of. Last season he scored 11 goals in 19 matches for Milan’s under 17’s, averaging 1.50 points per game. But this season has been his most rewarding, yet challenging season yet.

The young striker missed out on the first months of the season with a metatarsal fracture, which also saw him miss Italy’s U-17 world cup campaign where the Azzurri had high hopes for him. Colombo, however, showed great maturity as he posted “today’s pain is tomorrow’s strength” on Instagram after surgery on his metatarsal as his national team teammates left for Brazil in December.

Colombo underwent a tough rehab over the coming three months and showed great mental strength. Instead of letting the hardship affect him, he let it empower him instead – and that showed when he returned.

On February 1st, 2020, he returned to the Primavera squad as they faced off with Cittadella. Milan was up 1-0 by half-time when manager Federico Giunti decided it’s time for Colombo to make his long-awaited return.

The 18-year-old came on after the break and Cittadella didn’t get a chance to understand what hit them. In 45 minutes, Colombo scored a hat trick and Giunti couldn’t believe his eyes.

Before lock-down on March 8 in Italy, he would go on to score 9 goals in 6 matches for the Primavera – nearly reaching double digits. He’s averaged one goal for every 30 minutes he’s played in this year’s Campeonato Primavera, and he scored one goal in the decisive match against SPAL where the Primavera mathematically secured their league win.

Colombo is a rather big striker. His 183cm might not scare many defenders, but he’s very muscular for a kid of his age. Both Giunti and Pioli have described him as a well-built striker with great mental strength.

As for his characteristics, he’s a striker with a powerful shot, terrific finishing, good positionally to create chances for himself and his teammates with his movements, and a hard worker.

Colombo himself cites Gabriel Batistuta as his idol but says he’s also drawn a lot of inspiration from Fernando Torres, Edison Cavani, and Robert Lewandowski as well.

His progress in the primavera tempted Pioli to promote him to the senior squad, it even got him his debut when he came on for the last push against Juventus in the 82nd minute at Allianz Stadium. An appearance that saw him become the first player born 2002 to feature for Milan.

“It was a great emotion. I’ve worked for this moment for more than 10 years, right from the first day I arrived at Vismara. To make it in that stadium, against that team, makes it an even greater source of pride”, Colombo said after his debut against Juventus. That appearance, however, will probably not be the last we see of him.

The Primavera season won’t restart as Serie A has, but Colombo remains with the senior squad and has been handed the number 29 shirt.

With a tighter match schedule than ever, five substitutions allowed for every game, and Zlatan Ibrahimović out injured for quite a while, Colombo will likely get more chances to play for his childhood team.