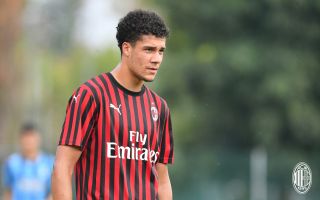 In our mid-season review of Milan’s Primavera team, we lifted three players who in our opinion, are the closest to reaching the senior squad. Daniel Maldini, Luan Capanni and Marco Brescianini.

This is the second article in a series of three where we will profile these three players, and in this article, it’s time to take a deeper look at Luan Capanni.

Capanni joined Milan’s primavera on a free transfer last summer ahead of the 2019-20 season from Lazio’s primavera. Originally, he’s a product of Flamengo’s academy – just like senior Milan players Lucas Paqueta and Leo Duarte. However, through his ancestors, he holds an Italian passport and has even expressed interest to play for the Azzurri in the future.

Capanni has stolen the spotlight whenever he’s played for the primavera this season and has been one of three players from the primavera this year worth highlighting of a move up to the senior squad in a somewhat near future – along with Daniel Maldini and Marco Brescianini.

As a player, there are a lot of similarities between Capanni and a young Zlatan Ibrahimović – with the exception of Capanni being more selfless and preferring to drop deep and get involved in the build-up phase.

The Brazilian is 190 centimetres tall and weighs 82 kilograms, according to his agency. Despite this, he’s very athletic, dynamic and fast – not ordinary traits amongst big players.

Capanni’s main strengths are his technique, his intelligence, wise decision-making for his age, using his big body to his benefit and his quick thinking. As mentioned above, he likes to drop deep from his striker-position to get involved in the buildups, and especially his quick thinking and big body becomes useful then.

He tends to outmuscle his defender, turn up and put the ball into play quickly and start an attack for his team in situations where the ball comes from his own half.

It’s obvious that Capanni always wants to have the ball. Whether it’s in buildups or in the box whilst his teammates have the ball around it. Speaking of the box, that’s where a lot of similarities to Ibrahimović comes to show.

As with Ibra, Capanni has great anticipation to see where the ball will arrive in the box and find himself there, ready to finish it right away or use his brilliant first touch to peg up a chance for himself to finish on the second touch.

Capanni’s stats show that he is very efficient in this role, even though he takes on a lot of responsibility in the buildup-phases. In his first season in Italy with Lazio’s primavera 2018-19, he scored 13 goals in 19 league games, and with Milan’s primavera this season he’s scored 9 goals in 12 games.

As a reward for his top performances in Lazio’s primavera, senior coach Simeone Inzaghi handed Capanni his Serie A debut in the final game week of the 2018-19 season against Torino.

Other reminders of Ibra come from his tendencies to take long shots (with a great right foot) and his will to put on a show on the pitch where he lives up to the Brazilian stereotype of playing samba-ball. There’s a lot of back-heel flicks and flair.

As of now, there aren’t any big flaws in Capanni’s game, but he needs to be tested on a higher level as both his experiences of Primavera football has come in the second tier (Primavera 2). That would be the logical next step in his career, to see how he measures with the best talents in Italy in Primavera 1.

In Primavera 1, the best talents in Italy plays – except those in the Serie A teams’ senior squads – and that would see Capanni grow. However, this is a question to when, not if, as Milan’s primavera re-qualified for the Primavera 1 after a year in the Primavera 2 where they went undefeated.

With the situation being as it is in the world at the moment, you can’t know when this is going to be, but it will happen at one point – and let us tell you, Luan Capanni will be ready.

Lazio really tried to keep a hold of him when Milan signed him last summer, and it’s no coincidence that Simeone Inzaghi handed him his Serie A debut and three games on the bench for Lazio. He saw the potential in Capanni, as Maldini did when he signed him.

Capanni is regarded as one of Rossoneri’s biggest talents. He was seen as one of Lazio’s biggest talents before he was snatched up by Maldini and head scout Geoffrey Moncada on a free transfer last summer. And Capanni was a very highly rated prospect at Flamengo’s academy as well. As he belonged to the same class as Real Madrid’s Vinicius Jr. and Lucas Paquetá – that’s not a lightweight epithet to be given.

Luan Capanni Dias is certainly one to look out for in the future, and maybe the not too distant future either…