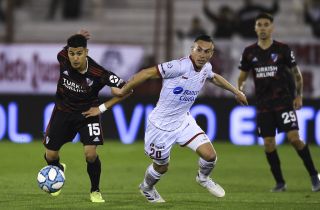 Armenian forward admits delight at reported Milan interest: “They are an important club”

Huracan forward Norberto Briasco has admitted that he is flattered by reported interest from AC Milan and would love to play with Zlatan Ibrahimovic.

Briasco is predominantly a right winger but who also knows how to play as a centre-forward, and is a talented player who many European clubs have focused their attention on.

The 24-year-old was recently linked with a move to Milan by Tuttosport, with the paper claiming that the Rossoneri could well be in the market for two strikers this summer depending on the future of the current group.

Briasco is ready to test himself at a European club and – in an interview with VbetNews on Wednesday, he did not try to cover up interest from the Rossoneri.

He has spoken in the media again on Thursday, this time to the microphones of Tuttomercatoweb.com, and seemed to express openness to a move.

“Milan are an important club, where great players have played including Ibra that having as a teammate would be beautiful. But in the meantime I am thinking of Huracan. And I keep my feet on the ground.”