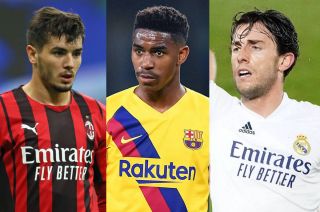 AS: Maldini at work as Milan target Real Madrid duo and Barcelona defender

The AC Milan management are at work to try and plug some of the gaps in their squad ahead of the 2021-22 campaign, a report from Spain has claimed.

According to Spanish source AS (via MilanNews), relations between Milan and Real Madrid have been good for years, and Carlo Ancelotti’s return as their head coach could mean that transfer market negotiations take off. Maldini and his collaborators have targeted right-back Alvaro Odriozola in the case that the negotiations with Manchester United for Diogo Dalot fail.

Milan are also working on the renewal of Brahim Diaz’s loan which would include an option to buy set at around the €20m mark. In addition to that, Milan are also looking to Barcelona and in particular Junior Firpo who is eyed as a back-up to Theo Hernandez on the left. The Blaugrana are asking for €15m, but the Rossoneri would like to close the deal with a loan.