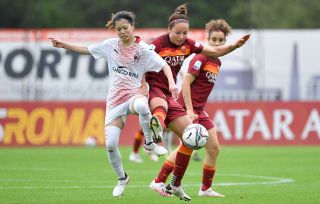 The AC Milan Women were held to a stalemate by AS Roma Femminile last Saturday.

Though the result was slightly disappointing, the Rossonere are still firmly in the running for next season’s Champions League. Here, we have a breakdown of the match… 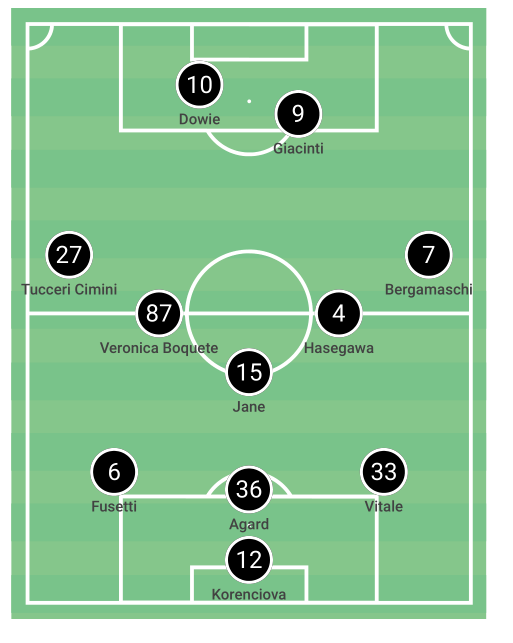 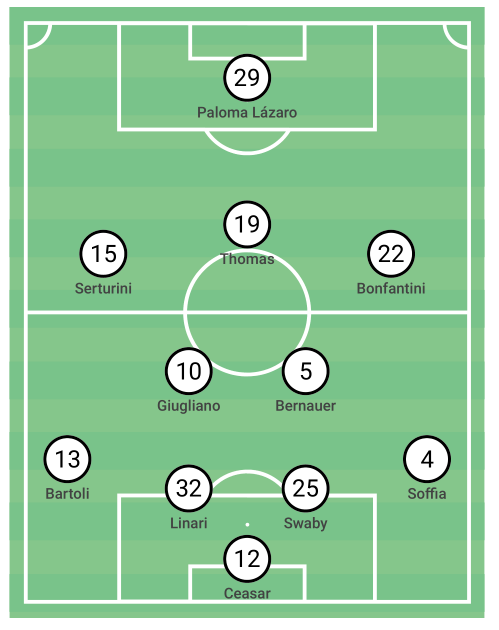 The game started off with Roma on the front foot as they won a free-kick at the edge of the box at around the two-minute mark. The set piece was conceded by Francesca Vitale, who fouled Roma’s Elisa Bartoli during the build-up of play. Roma, however, did not convert their chance. Valentina Bergamaschi would then follow this up with her run into the box shortly before the eighth minute. However, her run was cut at the seams and she didn’t get a shot on goal.

Then, at around the 17th minute, Annamaria Serturini’s shot was parried by Milan’s Korenčiova. Mária had a good match, as she saved Lindsey Thomas’ and Elena Linari’s attempts as well.
The Rossonere would answer this by heating things up and pushing forward. At the 19th minute, Yui Hasegawa fired a shot on goal from an excellent position. Unfortunately, it sailed over the crossbar.

Three minutes later, in the 21st minute, Bergamaschi would have another opportunity to score, thanks to a precise pass from Hasegawa, who managed to make the pass while under pressure. And in the 32nd minute, Vero Boquete latched onto a ball on the edge of the box and let it fly, but the goal was unfortunately stopped by Camelia Ceasar, who pushed the ball onto the crossbar.

The Rossonere had another chance to score at the 43-minute mark as they found themselves in the opposition’s penalty area, but neither Tucceri Cimini nor Giacinti were able to bring it home
The tempo for the second half of the match was a bit slower than the first, as the Giallorosse seemed to take their foot off the pedal and let Milan back into the game. At around the 50th-minute mark, the Rossonere gradually began to take control of the match.

One of the ways they did so was to replace Natasha Dowie with Christy Grimshaw (58′). Though it seemed odd at the time, the substitution did make sense, as Grimshaw had fresher legs and added more mobility to Milan’s attack.

Roma would not go down without a fight though. One of their best chances came from Palamo Lazaro, who tried to lob the ball into an empty net (59′). Fortunately for Milan, she failed to score.

The final chance of the game came at the 89th-minute mark when Vero’s through ball found Giacinti, who then tried to make a run into the box. However, Giacinti was stopped by a last-minute tackle from the brilliant Angelica Soffia. The game was an equal encounter by two evenly matched sides. It’s only fitting that it would end in a nil-nil scoreline.

During this match, Roma were able to shake off the timidity and naivety they had previously showed against Milan as they played rather aggressively against them.

This chart shows just how much the Giallorosse pressed their opposition. Before Milan could complete at least twelve actions, Roma would actively press them. They successfully disrupted the Rossonere’s rhythm and for the first few minutes of the game, they would not let them get anything going.

Now, compare this to their last game against Napoli, where it was Milan who pressed the Tartarughine. The fact of which, not only shows the stark differences between the two teams but also shows that the Giallorosse have grown in stature. Roma are no longer afraid of Milan.

Furthermore, though Milan had more possession, Roma demonstrated that they could do more with their time on the ball. As these charts show, Roma passed the ball more accurately. In particular, their progressive passes forward, along with their passes to the final third, showed that the team did a better job of constructing their attacks than Milan did. 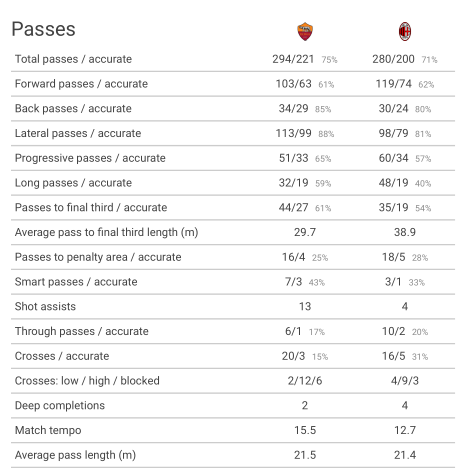 Overall, Roma spent more time in the Rossonere’s half than vice-versa. The fact that they had more touches and were able to carry the ball into Milan’s half would attest to this.

The Giallorosse have truly grown over the years. The team has shown that they can rumble with the Big Kids and are no longer afraid of the likes of Juve and Milan.

With this in mind, the Rossonere should be commended for their maturity and composure and how they were able to hold their own against the capital side, and did not lose to them (unlike Juve).

Both Milan and Roma tend to attack down the left flank, as the two teams exploited each others’ weaknesses. Roma would use their full-backs (Angelica Soffia and Elisa Bartoli) to provide width and depth to break pressure, switch the play, and get into Milan’s half.

They would then have their wingers like Serturini tuck into vacant space and put themselves in scoring positions as the ball moved from side to side. Roma would try to break their opponents defensive line this way as they made runs into Milan’s box to score goals.

Paloma Lazaro was the lone striker in their setup. The false-nine did successfully break Milan’s lines at times, as is evident by her  previously mentioned shot on goal at the 59th minute. Lazaro was instrumental in the team moving the ball upfield and creating chances to score.

One example of how Roma built their attacks is demonstrated here. Goalkeeper Camelia Caesar kicked off an attacking sequence by firing the ball upfield. Serturini would then use her speed to bypass the Milan defenders to run down the left flank. She would then pass the ball to teammate Lindsey Thomas, who was then smothered by the Rossonere’s defence.

Roma were quite effective on the counter-attack and Milan had to work hard to prevent them from scoring. Speaking of Caesar, it’s also worth noting that she only had to save two shots on goal while Korenčiová had to save ten.

Milan, on the other hand, built up their play from their centrebacks. The defenders would start the build-up phase with one player in the center and two furthest from the wide positions by building out from the back.

They would then look to build up their play horizontally and through the middle by having their technically gifted midfielders move the ball upfield. Yet whenever they tried to do so, Roma would be there to press them and stop them.

In the end, it was a war of attrition that nobody won.

As was noted before, Roma pressed Milan intensively. They did so while keeping their formation throughout the entire match. The Giallorosse’s defence was spearheaded by their fast and talented defenders, chief among them being Elena Linari and Angelica Soffia.

Linari has a good heading ability and during this match, she would not only use it to deflect shots away from Ceasar, but she would also use it to threaten Milan’s goal. Linari would then make breathtaking runs upfield to get back into position.

The team also pressed Milan high up the pitch to force them into mistakes. Roma also positioned themselves well and intercepted Milan’s passes before launching into a quick counter-attack.

Here is an example of this.

Milan’s defence held their own, but the one area where they really suffered is in their speed. As a result, Milan, at times, resorted to cheap fouls to stop Roma.

Still, the defence managed to keep the Giallorosse at bay and would snuff out their attack at the correct intervals. Milan’s defence also made 45 interceptions against Roma, and ten clearances against them (Wyscout). The fact of which, means that they know how to keep their composure and deal with more spritely opponents.

If there was one standout in this match for Milan, then it would have to be Milan’s outstanding goalkeeper, Mária Korenčiová.

The shot-stopper kept Milan in the game with fantastic saves like this one. She also ensured that the team ended the match with a clean sheet.

And with no goals conceded and the fact that she saved five out of the ten shots that came her way, it’s safe to say she had an excellent match as well. The team would truly be lost without her.

The bright spots for Milan

Though Roma took Milan by surprise and put on a good performance against them, the team did have a few bright spots during this match.

The first of which is how Valentina Bergamaschi played. The defender stormed down Roma’s flanks and gave them fits. She was also one of the few Milan players who actually created chances and nearly scored.

And there was also Vero Boquete’s shot, that unfortunately, did not find the back of the net. Still, it was one spectacular shot that should be heralded.

And let us not forget about the previously mentioned Korenčiová and Yui Hasegawa, who both shined brightly despite the attempts to snuff them out.

Add to this how Milan’s experience and maturity allowed them to eventually take over the game, along with the fact that they kept a clean sheet against a free-scoring, high octane opponent

The Rossonere will be in action again this weekend. They’ll take on Fiorentina this Sunday at 12:30 CEST (3:30am PST / 6:30am EST). The match will be crucial because if they win, then they will secure qualification for next season’s Champions League.

The hope is that they’ll have learned their lessons from this match and will figure out a blueprint on how to beat the Giallorosse. And once they do so, then they’ll bring home Milan’s first ever trophy.