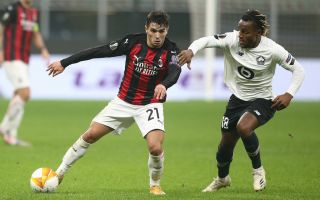 Brahim Diaz has started his loan spell at Milan in the best way possible, scoring three goals in nine games (five from start). The Rossoneri, therefore, want to keep him beyond this season but it won’t be easy.

As reported by Spanish outlet AS, Zinedine Zidane is delighted with the Spaniard’s performances in Italy. The Frenchman fell in lover with the player when he took over Real Madrid for the second time, and this has been amplified lately.

Diaz has put in great performances and helped Milan in their games, which is why the Rossoneri are already proving the possibility of signing him on a permanent basis. If Zidane gets to decide, though, that won’t happen.

Milan tried hard to include a buy-out option in the first place, but this was always rejected by Real Madrid. Zidane really liked the player and believes he can be a fundamental piece for the team in the future.

READ MORE: Sanches was decisive for Lille at San Siro – how close he came to joining Milan