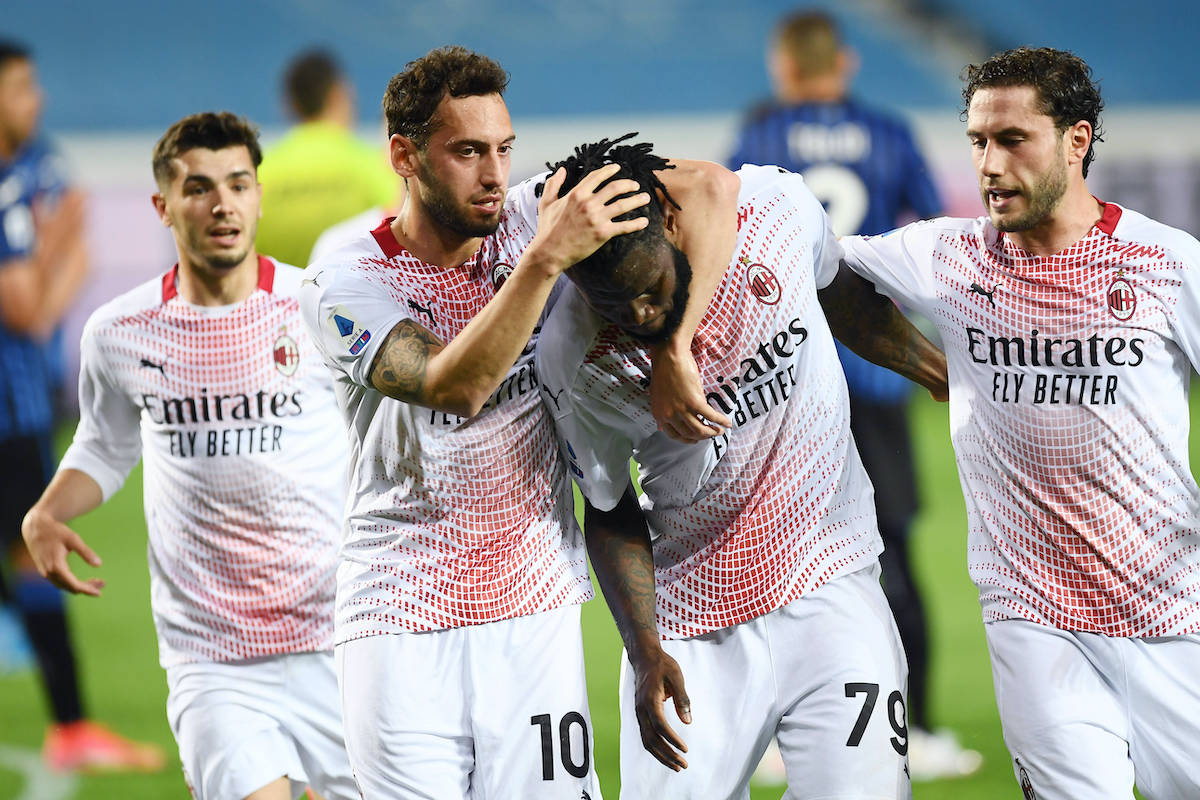 AC Milan ensured that they will be playing Champions League football for the first time since the 2013-14 season with a colossal 2-0 win over Atalanta.

Milan went into the game knowing that only three points would guarantee a top four spot, with Juventus and Napoli facing favourable games against Bologna and Hellas Verona respectively.

In the end it would be a Franck Kessie penalty in the first half that would set the Rossoneri on their way, and they got a second spot kick in added time at the end of the second half that the Ivorian also tucked away.

The result also means that Milan leapfrog their Lombardy neighbours into second place for their highest finish since 2012.

Head coach Stefano Pioli made one change to that line-up that drew 0-0 with Cagliari last weekend as Ante Rebic was benched due to not being in the best physical condition, with Rafael Leao starting in his place.

Milan created the first opportunity of the game when a direct ball up towards Leao ended up dropping favourably for Alexis Saelemaekers, who couldn’t hit the target from 20 yards out with a rising shot.

As news filtered through that Juventus had taken the lead against Bologna there was a touch more pressure on Milan, though Malinovskyi was the next player to shoot though the Ukrainian fired over in the 12th minute after finding some space cutting in from the right.

Not long after an opening appeared for Brahim Diaz to dart into space but rather than firing on his favoured foot he chose to try and feed Calhanoglu, who saw his effort blocked.

Atalanta had the next chance of the game too as a free-kick from the left side was whipped into a dangerous area but Djimsiti looped his header over the bar from near the penalty spot.

A number of heated battles in all areas of the pitch saw tensions rise just after the half hour mark, as Atalanta boss Gian Piero Gasperini was warned by the referee for his protests.

Seven minutes before the break, Leao knocked a ball past Romero and seemed to have latched onto it on the other side of the Argentine, but he went down having seemingly been fouled. It could have been a red card offence in truth, however the referee did not even see it as a foul.

There was a huge moment two minutes later as the Rossoneri were given a penalty kick. A neat one-two saw Theo Hernandez put in behind down the left side of the box and Freuler wiped the Frenchman out with a late challenge. Kessie took on the responsibility, and after a slow run-up he passed it into the bottom left corner with Gollini rooted.

Gasperini – who was visibly irate with how the first half went for his team – decided to make a change at the break, with Luis Muriel coming on for Matteo Pessina.

The first good chance of the second half fell to Duvan Zapata, as the Colombia international nutmegged Tomori with a shot from a narrow angle after Malinovskyi’s feed, however the ball rolled agonisingly wide of the far post.

Moments later they had another half-chance as a cross was glanced by Zapata and with Freuler waiting at the far post he scuffed his effort.

A double change followed for Milan in the 61st minute as Rade Krunic came on in place of Ismael Bennacer, while Soualiho Meite came on for Brahim Diaz.

Malinovskyi continued to be at the heart of Atalanta’s creativity and he should have done better when he tried to wrap his foot around a shot 20 yards out that ended up being straight at Donnarumma and fairly weak.

Milan’s first shot of the half came almost exactly halfway through it as Calabria tried an audacious attempt from the right byline having seen Gollini off his line, but it whistled over.

Less than a minute later Milan had a huge opportunity to double their advantage. Some excellent work from Meite saw the Frenchman take the ball about 50 yards before playing a wonderful pass to Leao in behind, though he hit the post with a deft dink over the onrushing Gollini.

The substitute Muriel quickly became the home side’s main creative outlet, and Donnarumma will have been relieved to see an attempt from just outside the box curl wide of the far post.

A further two substitutions followed for Milan with 12 minutes left as Leao and Saelemaekers made way for Diogo Dalot and Mario Mandzukic.

Muriel should have done better again when he got under the ball shooting first time following a cut-back from the right wing.

There would be one more piece of drama in the final minutes as a handball was given against Atalanta allowing Kessie to step up and double the advantage with another excellent spot kick, with De Roon also seeing red for his protests. The celebrations then ensued, as Milan’s top four spot was sealed.