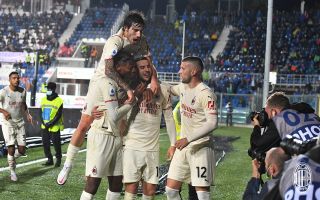 AC Milan produced a fantastic performance to beat their Lombardy neighbours Atalanta 3-2 at the Gewiss Arena on Sunday night.

The tone for a dominant and clinical display was set after less than 30 seconds, when Davide Calabria went through on goal after Theo Hernandez’s pass and gathered a rebound to slot in the opening game.

The timing of the second goal was perfect as Sandro Tonali seized possession late in the first half and surged through on goal to double the advantage, and Rafael Leao stroked home a third goal late on to seal the win.

Duvan Zapata’s penalty and Mario Pasalic’s close range strike did give La Dea late hope, but the Rossoneri would hang on to claim all three points and move back second in the table behind Napoli, who have won all seven of their games so far this campaign.

Head coach Stefano Pioli made two changes to the team that lost to Atletico Madrid in midweek as Simon Kjaer came back into the fold with Alessio Romagnoli getting a rest, and Sandro Tonali partnering Franck Kessie in the double pivot.

Milan started the game in what can only be described as the perfect fashion, taking the lead after just 28 seconds. A marauding run infield from Theo Hernandez split Atalanta open and he put Davide Calabria in behind with an excellent pass, and the full-back converted at the second attempt after the ball came back off Musso.

The early goal seemed to create space for Milan to attack on the counter as the home side pushed for a quick response, and a vital block was needed to keep out Brahim Diaz’s shot after Rebic had laid the ball off to him.

In the ninth minute Atalanta had a half chance to get themselves on level terms as a corner was not properly cleared and fell to to De Roon, who blasted over from the edge of the box.

There was a big let off for Milan four minutes later as Zapata was slipped in behind and Maignan produced a good low save, but in doing so the ball fell to Malinovskyi, whose effort was blocked by Tonali and cleared off the line by Tomori.

The spaces continued to present themselves and after a blocked Atalanta shot, Leao set Rebic away down the right side, with Musso forced into a reaction save from Brahim Diaz’s low shot after the Croatian’s lay-off.

Maignan made a sensational save down low to his left side from Zappacosta’s shot in the 20th minute, diverting it behind for a corner, and he once again kept them out from the resulting set piece after Zapata’s close range header.

Tomori made an absolutely superb recovery challenge inside the area to block the dangerous run of Pessina, who sustained an injury in the process and had to come off.

The game then became very stop-start with a number of niggling challenges and not much quality, but there was the feeling that the game was opening up just before the break, and it did.

Milan got their second goal just three minutes before the interval and it came through Tonali. The midfielder pressed high up the field and took possession off Freuler finding himself through on goal, and he finished with aplomb beating Musso with a composed finish.

Gian Piero Gasperini made a double change early in the second half by throwing Luis Muriel and Josip Ilicic onto the field, and the latter was the first to cause some panic with a flat cross that thankfully drifted over the bar.

Milan had a huge chance to potentially kill the game off just before the hour mark when a cross from Rebic on the right flank found Saelemaekers on his own inside the box about six yards out, but he headed straight at Musso somehow.

Calabria found himself in Atalanta’s third again just as he was for the opening goal, though this time a heroic block was enough to stop his effort from 18 yards after a neat one-two with Rebic.

There was a chance for the Rossoneri to put the game to bed when Saelemaekers was found in space in behind by a fantastically weighted Tonali pass, yet he didn’t pull the trigger and the ball was cleared.

Junior Messias made his official debut for the club as he came on in place of Ante Rebic, with the frustration growing among the home support as they continued to waste possession.

Milan did wrap up the points with just over 10 minutes left in the game, and it came rather predictably via a counter-attack. A barnstorming run from Theo Hernandez ended with him bobbling a ball through that was left intelligently by Junior Messias – who was in an offside position – and was stroked into the top corner by Rafael Leao.

The home side were given a late lifeline as Messias was harshly punished for a handball after a VAR review, and Duvan Zapata converted from the spot to make it a two-goal game once again.

Fode Ballo-Toure and Pietro Pellegri came on for some late minutes, and Milan conceded a second goal inside the final minute of added time from Mario Pasalic to make things briefly interesting.