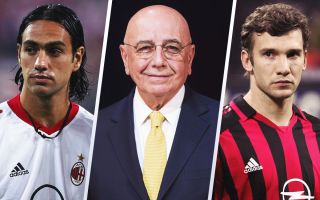 As a Milan fan, it is impossible to think of the Silvio Berlusconi era without also having fond memories of his right-hand man Adriano Galliani.

When media mogul Berlusconi took over Milan in 1987, nobody expected them to become a European powerhouse as quickly as they did, but the man who would go on to be the Prime Minister of Italy quickly showed he meant business with lots of investment in a squad that had twice suffered relegation in the 1980s.

In truth though he couldn’t have done it without appointing his long-time friend Galliani as the Rossoneri’s Chief Executive Officer. The pair built on a relationship already full of trust; if Galliani said Milan needed a particular player then Silvio would made sure the cheque was written.

It was through this bond that Milan were able to blossom into one of Europe’s elite clubs just as they had been in the decades prior. Sites like 188BET can give you odds on them doing that again after a few years of stagnation, but similar wise recruitment is needed.

Speaking of which, it is perhaps only fitting that – on Galliani’s 77th birthday – we take a look back at some of Il Condor’s most inspired pieces of business across his 31-year tenure, a reign which brought 29 major honours including 8 Scudetti and 5 Champions League titles.

Simply put, Galliani and the Milan management assembled some of the best club sides every seen starting from the late 1990s running all the way into the late 2000s. It perhaps all began with the impressive coup for Dutch trio Marco van Basten, Frank Rijkaard and Ruud Gullit, three of the best players in the world at the time.

That was that starting shot to show that Berlusconi was not messing around and was dead set on making the Diavolo a bonafide European powerhouse. The trophies started to come and so did the hunger and greed for more success.

The motto seemed to become ‘if you can’t beat them, sign them’ as incredible creative players such as Zvonomir Boban and Dejan Savicevic were brought in under Galliani’s watch as well as French duo Marcel Desailly and Jean-Pierre Papin who became superstars of their time.

Big-name centre-forwards arrived in the mid-to-late 1990s as eventual Ballon d’Or winner George Weah joined – becoming the club’s top scorer three seasons in a row – as well as German international Olivier Bierhoff and eventually Andriy Shevchenko, another man who would go on to win Player of the Year.

The amount of money spent was never absolutely exorbitant – not at the levels of Real Madrid, Barcelona and some Premier League sides – but the Rossoneri’s transfer record was smashed when playmaker Rui Costa arrived.

Then there are the Italian players like Alessandro Nesta (another big-money opportune signing from a title rival in Lazio) plus Gennaro Gattuso and one of the club’s favourite sons in Pippo Inzaghi.

He also had a penchant for the South American market too, with many Brazilian stars joining such as Cafu, Thiago Silva, Alexandre Pato, Rivaldo, Ronalo and Ronaldinho, plus of course the iconic and legendary Kaka.

With that being said, we have decided to try and compile and XI of the best players that Galliani signed (youth academy graduates not considered, hence the lack of Baresi, Maldini et al.).