Has Borussia Dortmund striker Pierre-Emerick Aubameyang just dropped a big hint that he is returning to the Rossoneri? 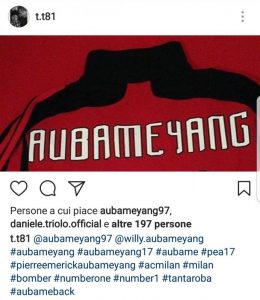 The Gabonese international has been at the center of the transfer window by trying to force a move away from BVB this summer. It was first reported that he would be moving to China, before former club AC Milan came in with a reported offer of 8.5 to 9 million euros a year.

Aubameyang who once wore the Rossoneri colours, may be looking to engineer a move back to his former club by reportedly refusing to renew his contract with Dortmund.

He usee Instagram to show his support for AC Milan and what looks like a ploy to make a move back to the San Siro.  He recently liked a photo posted by an AC Milan fan of a 2007-2008 Milan jersey with his name on the back.

After any hopes of signing Andrea Belotti look to have taken a hit, with the Torino star apparently ready to re-sign with Il Toro, Auba seems like Milan’s best hope.