AC Milan could field one of their youngest starting XIs ever in terms of average age next season, according to a report.

The Rossoneri have had a clear market strategy in the current window: replacing older, experienced players such as Ignazio Abate, Riccardo Montolino and Cristian Zapata with younger more promising acquisitions.

As a result, Milan could field a starting eleven next season with an average age of just 22.09 years next season, as per the paper edition of Tuttosport. 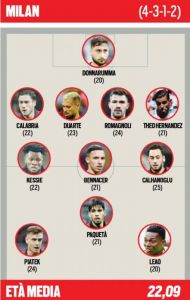 They suggest that Marco Giampaolo, in a 4-3-1-2, will line up with the following next season: Donnarumma, Calabria, Romagnoli, Theo Hernandez; Kessie, Bennacer, Calhanoglu; Paqueta; Piatek, Leao.

Calhanoglu is the oldest player in that line-up aged 25, while there are five players aged 21 and under.

No squad, as per transfermarkt, has had an average squad age of under 24 years since the turn of the century.