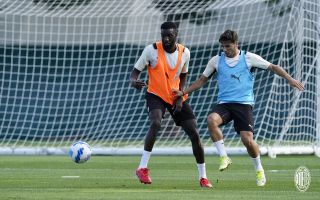 AC Milan will take on Lazio this Sunday and Tiemoue Bakayoko could feature in his first Rossoneri game in two years. The Frenchman, of course, is back at the club after loan spells at Monaco and Napoli from Chelsea.

As highlighted by MilanNews, the last game the midfielder featured in for Milan was back in May of 2019, when they took on Frosinone. The Rossoneri won that game by two goals to nil and Gennaro Gattuso was the coach at the time.

Despite a good 2018/19 season, Milan decided not to redeem Bakayoko and sent him back to Chelsea. Two years later, though, he’s back and ready to prove his worth so that he can stay on a permanent basis.

Franck Kessie and Sandro Tonali are expected to start the game and we could perhaps see Bakayoko in the second half. It’s certain, however, that we will see the Frenchman quite a lot this season.