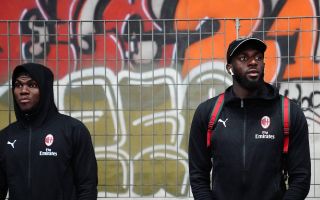 AC Milan summer signing Tiemoue Bakayoko has revealed his desire to stay beyond his initial loan spell from Chelsea, and encouraged Franck Kessie to renew.

Bakayoko spoke at a press conference which marked his official unveiling as a Milan player, answering questions from journalists. His comments were transcribed by MilanNews and we have translated them below.

Obviously the 27-year-old has arrived on an initial loan deal – something which is very familiar to Bakayoko now given the last three years – but he was asked by one journalist what his plans are for beyond 2023.

“I hope to stay here even after these two years on loan, everyone knows how attached I am to this club that I consider my home. When you are at Milan you must always aim to the maximum, I will give my all to win as many trophies as possible,” he said.

Bakayoko was also asked about what it is like to reunite with Franck Kessie, a player whom he had a good relationship with during that first loan spell but one who also faces an uncertain future given his current contract expires at the end of the season.

“I feel good with him. He has grown and improved a lot in all respects, I’m happy to find him. I can say about his future that I hope he can stay at Milan.”