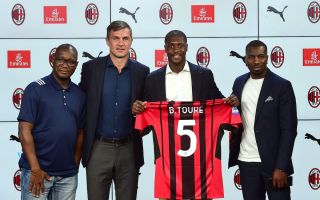 New signing Fode Ballo-Toure has outlined some of his main strengths as a player, as well as revealing why his spell at Monaco has made him grow.

The Senegal international joins Mike Maignan, Fikayo Tomori, Sandro Tonali and Olivier Giroud as the latest piece of business conducted by directors Paolo Maldini and Ricky Massara, joining on a deal until 2025.

After being officially unveiled as Milan’s fifth signing yesterday Ballo-Toure spoke to Milan TV and expressed his delight at sealing the switch, with his comments transcribed by MilanNews.

He began by reflecting on his time at previous club Monaco, who he joined from Lille part way through the 2018-19 season but never really established himself as a starter.

“The first year at Monaco was positive, the second more complicated, but despite everything I learned a lot. I understood what to do in order to grow and now I know exactly what I have to work on,” he said.

Next season Milan will make their first foray into Champions League football since the 2013-14 campaign, and it is a competition that Ballo-Toure has never actually played in despite playing for two of France’s top clubs.

“Unfortunately I never played in it. With Lille we finished second and then I went to Monaco, but they didn’t qualify. The UEFA Youth League is a youth tournament, it’s for young players. It’s something. similar, but it is not at the same level. The Champions League is something incredible, I hope to play it soon, to prove my worth and to get as far as possible with Milan.”

Ballo-Toure will arrive at Milan as a relative unknown to many, but he elaborated on some of his main strengths, that fans will be hoping to see on the field in the upcoming campaign.

“I play aggressively, I am fast, determined and strong from a mental point of view. I am a good person,” the 24-year-old concluded.