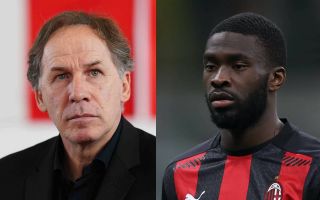 Franco Baresi has confirmed that AC Milan will do all they can to ensure that Fikayo Tomori remains beyond the end of the season.

Tomori arrived on loan from Chelsea during the January transfer window and has been hugely impressive in his appearances so far for the Rossoneri, with the €28m option to buy included as part of the deal now looking like an increasingly tempting figure.

The Englishman has forced his way into Stefano Pioli’s most used centre-back pairing alongside Danish captain Simon Kjaer, forming an excellent partnership with him given their complimentary skill set.

Now, Milan’s vice president Franco Baresi has seemingly confirmed that the club plan to try and sign Tomori outright once his loan spell is over, as he gave an interview to La Gazzetta dello Sport.

“We’ll do everything to sign him on a permanent deal. Two months are remaining until the end of the season, and it’s not only up to Milan,” he said.

“Tomori is imposing himself with talent and determination. He has shown no fear to play in a new league. Potentially, he can become a great champion. I hope he lives up to expectations.”