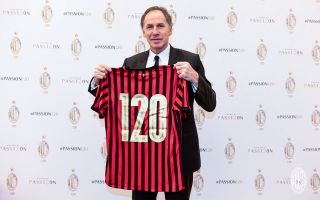 Honorary vice president and legendary captain Franco Baresi has looked back on his illustrious career as a player, in which he became an icon of AC Milan.

Baresi is a man who needs little introduction to most Milan fans, as he spent his entire 20-year career with the Rossoneri, captaining the club for 15 seasons.

He is considered one of the greatest defenders of all-time and was ranked 19th in World Soccer magazine’s list of the 100 greatest players of the 20th century.

He spoke to BeIN Sports in France and offered a reflection upon his playing career, admitting his belief that talent was never enough for him and that he got to the top through hard work.

“I’ve matured, and now I’m wiser. I think back of all the sacrifices, and I think that talent wasn’t enough, it takes a lot of work which was my strength,” he said.

“The captain’s armband is a simple piece of fabric but it has an incredible effect on who wears it. I was only 22 years old and I needed to prove my ability to play and wear it. It gave me the courage to lead my team-mates.

“I lived beautiful memories that I will keep forever with me. Nils Liedholm launched me, Gianni Rivera was my captain and I saw Maldini make his big debut then take over and everyone knows the rest. It was an honour for me to play alongside these incredible stars.

“I know Milan fans appreciate me but I’m so proud to see other clubs’ supporters think well of me. When you win you don’t put yourself in the opponents and supporters’ shoes. Now years have passed, I say to myself that I should’ve had a bit more consideration for them.

“What I’ve learned during all these years is that Milan is a club marked with a certain philosophy and mentality. When a player wears this shirt, he carries a great responsibility, this is a club with history. When you put on this shirt, you have to give everything.

“I always believed that I could achieve whatever I wanted and Milan allowed me to do it, that’s why I always tried to give back to the club by giving my best on the pitch.”

He also spoke to Sky Italia and offered a reflection on the current team, with his comments transcribed by MilanLive.

“After the lockdown, it’s like something changed inside the players, they want to prove that it was not the real Milan before the break. Now there is awareness of being able to compete with everyone,” he said.

Asked who he would compare Zlatan Ibrahimovic with out of his former team-mates, there were no surprises to hear Van Basten’s name mentioned

“I think of Van Basten and Gullit who had the physicality and personality. Surely Ibra is making a difference here just like how they did.

“Ibrahimovic has no end. Physically, he’s fit. Mentally, he wants to amaze. Only Ibra can know when he’s had enough.”

On what Milan means for him: “Milan is everything to me, since I debuted it has always been a second family. I was pleased to see the banner of the fans, they always surprise me and love me from day one.”

On the Milan project: “It is important that there are figures like us in the club, to remember history. Those who arrive are stimulated by certain figures and immediately understand the values ​​of this club.”

On Maldini as a director: “Paolo was a phenomenal player, as a manager he is showing all his qualities. He is always attentive, scrupulous, competent, he wants a Milan at the top in the future as he did in the past, despite the difficulties. He should be admired for that.”

On the excellent results: “Milan are reaping the fruits of the work and dedication of these years. After the lockdown something clicked inside. It wasn’t true Milan before, but they have shown that they have quality. Now there is the awareness of being able to compete with all”.

On what has changed compared to last year: “Pioli knew how to stimulate and involve the team. All the players are at ease and are able to express themselves for who they are and to perform at their best.”

If Milan can win the Scudetto: “This Milan must always think big, they must have courage. They know they can play against anyone.

“At the beginning of this year there is continuity, this gives you confidence. It depends on us, with all respect for others. It reminds me of Sacchi’s first AC Milan. Nobody thought we could do what we did. With dedication and trust, you can also do what you don’t expect.”

On Donnarumma: “Gigio is our product. Raised by us, a true AC Milan player. He must make his choices with serenity and be happy with what he will choose.