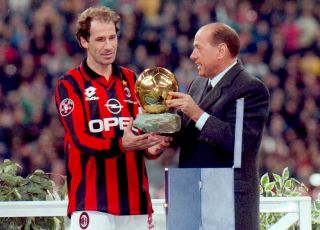 Baresi reveals why Berlusconi brought so much success to Milan

AC Milan legend Franco Baresi has revealed that Silvio Berlusconi’s ‘innovation’ was a huge part of the reason the club were so successful under his ownership.

Berlusconi took over the Rossoneri when they were on the verge of bankruptcy back in 1986, and he oversaw the most successful period in the club’s history.

Milan won 29 major honours during Berlusconi’s tenure including seven European Cup/Champions League trophies, and he brought some of the biggest names in world football to the San Siro.

However, since selling the club he has been very critical of Milan and in particular the new owners and their decision making.

Despite this, Baresi – who captained Milan for 11 years under Berlusconi – looks back on his relationship with the former Italian Prime Minister with find memories.

Speaking at the presentation of the book ‘Sempre Milan’ to commemorate 120 years since the club’s foundation, Baresi lifted the lid on Berlusconi, and his words were transcribed by MilanNews.it.

“Berlusconi transmitted something important. He brought a new philosophy by saying he wanted to get to the top of the world in a few years. We came from difficult years and we were skeptical, but with his innovative ideas, he led us to great goals.”