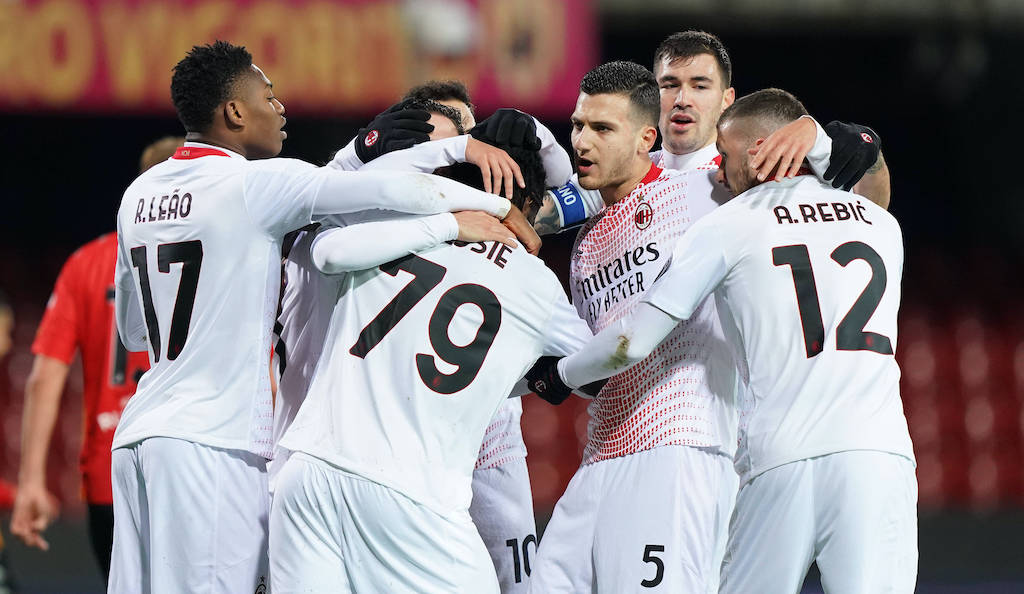 AC Milan took back top spot in the Serie A table from rivals Inter after a battling 2-0 win over Benevento in which they played most of the game with ten men.

The Rossoneri took an early lead as Ante Rebic was fouled inside the box and Franck Kessie despatched the penalty, but before the break Sandro Tonali was shown a red card for what was adjudged to be a high boot after VAR review.

A piece of individual brilliance from Rafael Leao doubled the advantage for Milan as he curled in from a narrow angle, and Gianluca Caprari missed a penalty to pretty much confirm it was the away side’s day.

It was a phenomenal effort considering the circumstance to keep a clean sheet and it is the perfect start to the new year as Milan leap back above their city neighbours to the summit of Serie A.

Head coach Stefano Pioli made four changes to his line-up from the team that beat Lazio before Christmas as Diogo Dalot came in for the suspended Theo Hernandez, Simon Kjaer returned from injury to replace Pierre Kalulu, Franck Kessie came back from suspension to take Rade Krunic’s place and Brahim Diaz started on the right wing with Alexis Saelemaekers and Samu Castillejo not fit.

Milan had the first chance of the game and it came through Brahim’s trickery. The Spaniard received a pass from Tonali and turned into space well before firing from around 20 yards but just curling his effort wide of the far left post with Montipo in the Benevento goal at full stretch.

Rafael Leao will have been relieved to have seen the offside flag go up inside the ninth minute when he dragged his first time shot wide having been put through on goal by Ante Rebic.

After Benevento had a penalty shout turned down at one end as Caprari went down under a challenge from Brahim Diaz, Milan were awarded a spot kick of their own when Rebic pressed and was cleaned out by Tuia inside the box with the home side failing to play out from the back.

Kessie took on the responsibility and made absolutely no mistake from 12 yards, sending Montipo the wrong way and sidefooting into the top left corner.

The Giallorossi were inches away from levelling the game through Roberto Insigne as the ball fell to the winger just outside the box and with perfect technique he put his foot through the ball but saw his effort crash against the post and bounce to safety.

Milan were reduced to 10 men just after the half hour mark and there was certainly some debate as to referee Pasqua’s decision. He originally gave a free-kick and a yellow card for a foul by Tonali, but upon VAR review he adjudged that the midfielder had gone in high and produced a red card.

A change followed after the incident as Rade Krunic came on in midfield to replace Brahim Diaz as Pioli switched to a sort of 4-2-2-1 formation.

Moments later Milan were under the cosh as Benevento had a number of corners in succession, the best chance coming as Letizia fired a swerving effort from 20 yards that Donnarumma did well to follow and parry behind.

Despite the shift in pressure, the Rossoneri had a big chance to double their lead as a cleared corner was put back into the box and headed across goal by Kjaer, yet Romagnoli inexplicably hooked an effort wide with Kessie lurking behind him with a much better chance.

Milan were let off the hook twice in quick succession just before the break; the first time when Insigne swung inside the box and fired an effort that deflected into Donnarumma’s hand, and the second when Hetemaj also fired straight at the Italy international from outside the box.

Despite being a man down it was Milan who doubled their advantage with the first opportunity of the second half. Rebic received the ball in midfield and barrelled towards goal before firing a pass to Leoa that he beat Montipo to, and with the keeper off his line the Portuguese forward chipped the ball over him and over a defender from a very narrow angle to make it 2-0.

Benevento were given the chance to get back into the game right on the hour mark from the spot and the substitute Krunic was the culprit. He went through Caprari inside the area and there were no arguments about the decision, yet the man who was fouled inexplicably dragged his penalty wide by some distance.

As was perhaps to be expected, the hosts began an onslaught to try and get the goal they hoped would unlock the game in their favour, but they kept missing big chances to do so. They had an effort directed wide from Barba after a cross to the near post, and moments later Lapadula turned brilliantly but his shot was met by an equally outstanding save from Donnarumma to stop his former team-mate scoring.

A change followed inside the final 20 minutes as Samu Castillejo came on for Rebic, and not long after the Calhanoglu hit the inside of the post with a low drive from 25 yards that was so close to sealing the three points.

There was a double sub with 10 minutes left on the clock as Andrea Conti and Pierre Kalulu came on in place of Kjaer and Calabria.

A huge chance for a third goal came as Leao was put in behind the Benevento back line with acres of space to run into and he pulled the ball back to Kessie, who hit the inside of the far post with his effort from about 12 yards out, the ball bouncing across the goal line and out.

Schiattarella came close for Pippo Inzaghi’s side with a curling effort that deflected narrowly wide of Donnarumma’s near post, and from the resulting corner Glik headed wide in what would be the last chance for the home side.