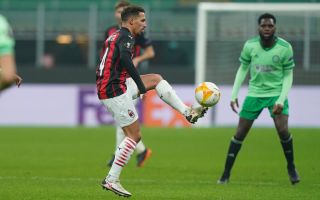 Milan continued their good run of form with a 4-2 win against Celtic this evening, securing their spot in the Europa League knockout phase. Ismael Bennacer made his return as he came on in the second half.

The Algerian has been recovering from a minor muscle injury, having missed out against Fiorentina at the weekend. After 61 minutes this evening, Stefano Pioli decided to send him onto the pitch and the midfielder did well.

Bennacer was behind the Rossoneri’s fourth goal, spreading the play with a lovely cross to Jens Petter Hauge on the left flank. The Norwegian then did everything right to set up Brahim Diaz in the box and the Spaniard made no mistakes.

After the game, Bennacer spoke to Sky Italia and MilanTV (via MilanNews) on the Rossoneri’s comeback from two goals behind. He also heaped praise on his manager Pioli for completely changing the spirit of the team.

Entering in the second half: “It’s cold, we have to warm up well and when you enter like this you have to be concentrated and give everything.”

On the comeback: “As we demonstrated tonight, we showed a great team spirit. Coming back from 2-0 requires a great team mentality. We must never give up and we are working hard.”

On Pioli: “He changed the team, you can see from the spirit with which we play and how we work on the pitch. We do what he asks well.”

On his condition: “I had a little pain in the adductor. I’m doing everything to be at my best for the team.”

On his midfield partner: “For me, it’s the same no matter who I play with. With Franck, I have been playing for the longest time, but Sandro is a great player, we are always doing better when we play together. We know each other more. We have to do everything to help the team.”

On Milan: “There were several new players, Ibra brought a lot of experience, a mentality that we didn’t have before, a champion mentality. We have to keep it and only in this way can we win games.”

READ MORE – Hauge reflects on his breakout night against Celtic: “We help each other, it’s like a big family”