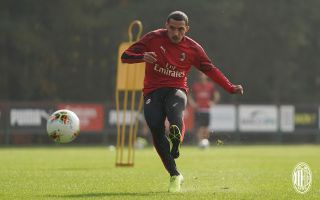 Bennacer: “I must become a leader for Milan; Boban tells me to watch videos of Pirlo”

Ismael Bennacer has pledged to become a ‘leader’ for AC Milan, and has admitted he is drawing inspiration from Andrea Pirlo.

The Algeria international arrived at Milan from Empoli over the summer in a deal worth €16m and despite struggling for playing time at first, he has started the last two games under new head coach Stefano Pioli.

Bennacer has actually been one of the few bright spots in a season which has seen the Rossoneri lost six of their first 11 games – something which hasn’t happened for 78 years.

The most recent defeat was a damaging 2-1 home loss to Lazio on Sunday, the first time Milan have lost at home against the Aquile in Serie A since 1989.

Reflecting on the game, Bennacer admitted the team must be able to control difficult moments better.

“I feel good and I’m sorry about how that match ended,” he told La Gazzetta dello Sport (via Football Italia).

“Previously I played in an attacking position, but for the past year-and-a-half I’ve been playing in front of the defence.

“It has taught me a lot, but I still have a long way to go before I say it’s good. I know I must be a more of a leader. I need to speak more, something my role requires.

“I need to learn how to give my teammates the best indications, to control the difficult moments. Today I’m already talking a lot on the pitch, but outside I’m very quiet. But I need to do it even more.

“And I need to grow tactically, to look for the ball, to know how I can pull away from the pressure and be available for my teammates.

“Obviously, Milan are Milan and Empoli are Empoli. But football is the same everywhere, I only play with better players now. That’s why I say I’m not affected by the pressure; I think it will do me good.

“The mistakes are still there, but they don’t depend on where you are. I repeat, I know which areas I must improve and my choice to come here has been the best I could have done.”

The 21-year-old then revealed that Zvonimir Boban had advised him to watch videos of Andrea Pirlo in order to help model his playing style.

“I’m inspired by Iniesta and Verratti, I follow them closely. When Pirlo played, I was only little and I didn’t get to watch him so much live.

“I know he is one of the best and Boban always reminds me of that.

“He tells me: ‘Watch how Pirlo played, he wasn’t very quick but always knew where the ball would be and where his teammates were. His positioning was always perfect.’ Now I study him in videos.”