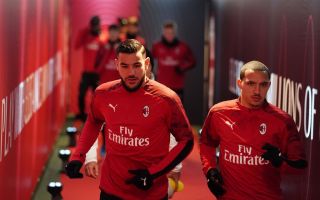 Bennacer jokes with Hernandez: “I teach him French because he can’t speak it”

During yesterday’s event From Milan With Love, which was organised by AC Milan and Roc Nation, a few of the Rossoneri players spoke briefly. Ismael Bennacer was one of the players that made an apperance.

Milan organised a similar event back in the spring, making the most of their partnership with Roc Nation, collecting money for charity work in these tough times. Yesterday, as mentioned, a new player talked about different things during the stream.

Bennacer, as cited by MilanNews.it, joked about his teammate Theo Hernandez. Many languages are spoken in the dressing room as this is what his question was about, but the midfielder decided to joke about his teammate.

“We speak many languages ​​in the dressing room, but Italian is the one we speak the most. My language is French and I also speak Spanish. I teach him French [Theo Hernandez] because he can’t speak it (laughs),” he stated.

Hernandez, of course, was born in Marseille but has spent most of his time in Spain, having joined the academy of Atletico Madrid at a very young age. We can only assume that he wasn’t too pleased with Bennacer’s response.