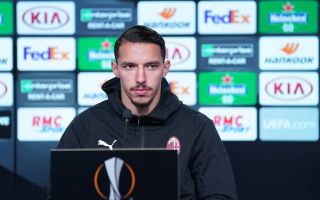 AC Milan midfielder Ismael Bennacer has insisted he is ‘very happy’ at the club and that he is ‘learning a lot’ under Stefano Pioli and team-mate Zlatan Ibrahimovic.

Milan will be looking to get some kind of payback on Lille, as the Ligue 1 side came to San Siro and snapped Milan’s 24-game unbeaten run across all competitions with a 3-0 win earlier in the month.

That moved them above Milan and back top of the group, making Thursday night’s clash at the Stade Pierre Mauroy vital, but the Rossoneri enter the game feeling confident after Sunday’s 3-1 win over Napoli.

Head coach Stefano Pioli will not be on the bench for the Europa League group stage match due to the fact he still has Coronavirus, while Zlatan Ibrahimovic, Rafael Leao and Alexis Saelemaekers are all out injured.

Bennacer spoke to the media ahead of the game, with his comments transcribed by MilanNews and translated below.

Can we say that it was a team win in Naples?

“Sure, we won as a team. It was hard, it was difficult, but we were all together. That’s the spirit.”

Is there a desire for revenge against Lille?

“Of course, when you lose a game and there is a return you want to win. We are doing everything to win.”

You have a €50million clause, will it affect your performance?

What does it mean to be back in France, given that you played there?

“It’s always a pleasure, especially to play against a great team like Lille. But it’s nice to play with Milan too.”

One year ago you had just become a starter at Milan, today you are irreplaceable. How important was Ibrahimovic for your growth?

Was the defeat against Lille a surprise?

“It was a difficult defeat, we suffered against a great team and we lost. We worked hard on what went wrong during the match and what didn’t work, and we will try to win tomorrow.”