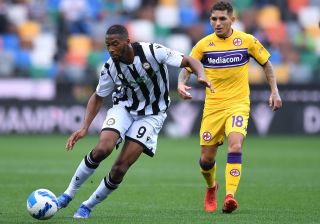 AC Milan are interested in signing Beto from Udinese as he seems to be the ideal centre-forward of the future, according to a report.

This morning’s edition of il Corriere dello Sport (via MilanLive) writes how Beto would be the ideal profile for Milan who need future certainties in attack for the future. Beto is young, has high potential but also has the right physical mould for a striker in Pioli’s 4-2-3-1 formation.

With 7 goals in 16 league games Beto is beginning to turn heads and it will not be easy for Milan to sign him as early as next month for two reasons in particular: the first concerns cost given that Udinese would only consider a permanent deal for €15m, and the second is formula related.

The Friulians have yet to sign him permanently from Portimonense because they have him on loan with obligation to buy for €7m plus €3m bonuses. In the event of a sale to Milan, Udinese would have to take on this expense up front before letting him go. However, Milan are seriously interested in the Portuguese forward and may try their luck in the summer.

READ MORE: President of Pisa confirms Milan’s interest in striker: “In June we can talk about it”