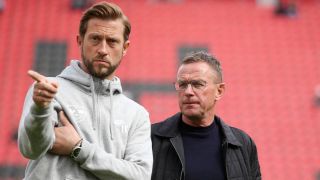 Ralf Rangnick will try and convince three staff members from RB Leipzig to join him for his new adventure at AC Milan, one journalist has claimed.

According to Christian Falk of Bild (via MilanNews), a deal between Rangnick and Milan will be formalised in the coming weeks, with talks between the parties having reached the decisive stages.

There have been rumours in Italy that Rangnick will ask to bring sporting director Paul Mitchell with him from Leipzig, as well as coaches Lars Kornetka and Moritz Volz.

Falk also added in his interview with MilanNews that bringing his own staff will be central point of Rangnick’s requests as he wants collaborators who are faithful to him and his philosophy. The journalist believes that Mitchell and Kornetka will arrive.

Interestingly, he adds that RB Leipzig chief scout Laurence Stewart is another man he will try and bring, even if he does hold current Milan chief scout Geoffrey Moncada in high esteem.

A press officer for him and a psychologist for the team could be further possibilities, Falk adds.