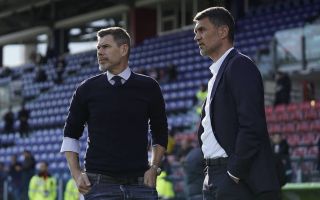 Zvonimir Boban has revealed that leaving AC Milan as a player was much more painful for him than as a director.

Boban spoke to Corriere del Ticino and discussed his Milan farewell and the excellent performances the team have provided since the resumption of Serie A. The questions and answers have been transcribed by MilanNews.

Since lockdown Milan have hardly missed a shot and Pioli has earned confirmation: has the performance of the Rossoneri surprised you?

“Milan needed two players of experience and a bit of time. The choices we made at the time have now been understood. And our work re-evaluated,” he said.

“Here, I’m really proud of this. Milan now has the basis for returning to the top and what it should be: a winning club at the highest level.”

“It doesn’t matter, it’s more important that the team we have built promises a better future than in recent years.”

Milan owe you in particular the arrival of Zlatan Ibrahimovic and Ante Rebic: what kind of players are they and what have they given to Milan?

“Ibra is a phenomenon and with him everything has changed. He made a difference on his own, but beyond that he improves everyone around him. Well, he’s very smart: he sees the game before anyone else.

“Rebic, on the other hand, did extraordinary things after suffering unfairly at the beginning of her adventure. We were all surprised by the improvements made and by the continuity of performance at the highest level. We are still talking about a World Cup runner-up, a player of experience and character.”

How much is this club and this team missing to reach the levels of Berlusconi’s Milan?

“It is not fair to make comparisons, but I believe that to be competitive and perhaps winning you still need 30-40%”.

Was it more difficult for you to say goodbye to Milan as a player or, a few months ago, as a manager?

“Obviously as a player, those emotions are unrepeatable. I also love the office, but the magical green square is something else. And it is normal to be so.”

Do you think that his return to the Rossoneri or a return to FIFA is more likely?

“Now I enjoy my Croatia and family. We will see later the how and the where.”