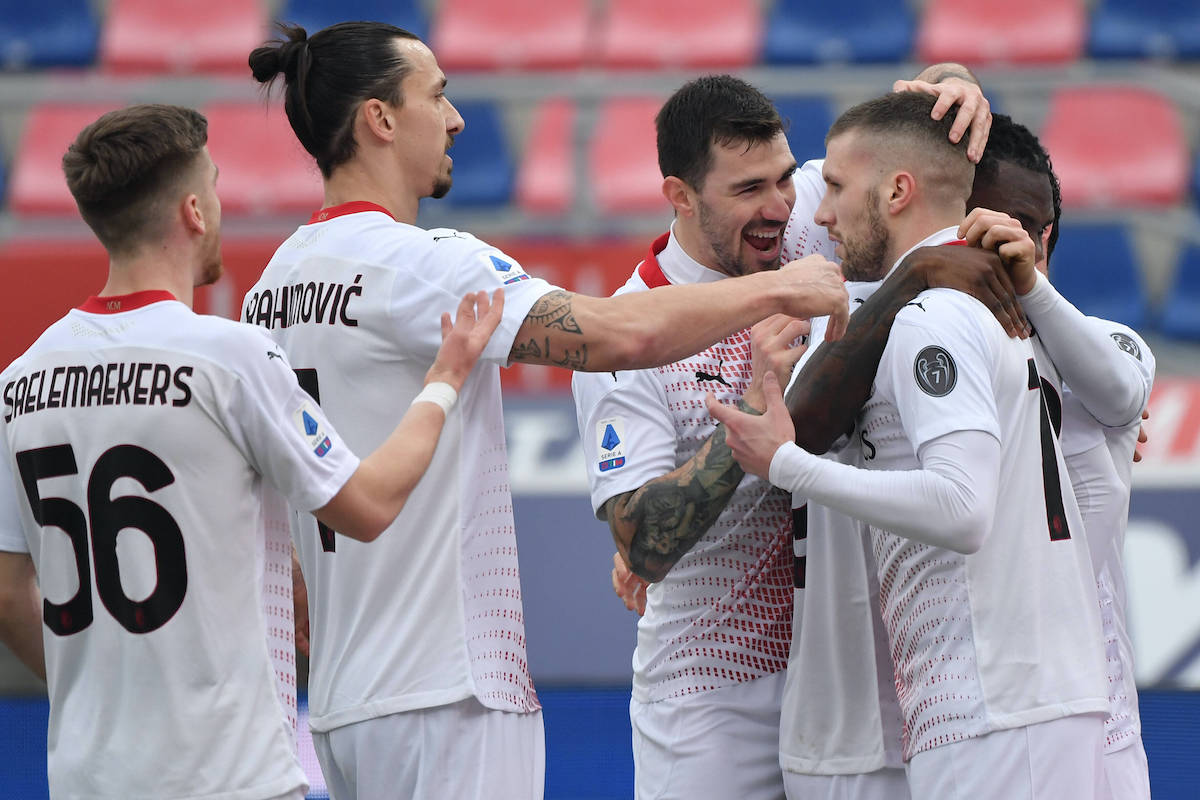 AC Milan ensured they will keep their lead atop the Serie A table as they ran out 2-1 winners against Bologna at the Stadio Renato dall’Ara on Saturday.

The first goal came in the first half when Ante Rebic was on hand to fire home a rebound after Zlatan Ibrahimovic had missed the initial spot kick, which came from Rafael Leao being hauled down inside the box.

The second goal was also the result of a spot kick, but this time Franck Kessie converted at the first attempt after a clear handball inside the Bologna box.

Former Milan man Andrea Poli made it a nervy finish as he converted with virtually his first touch inside the last 10 minutes to halve the deficit, but the away side would hang on for a big three points.

It means Milan are five points clear atop the table, albeit with Inter having a game in hand that they will play against Benevento tonight.

Bologna produced the first threatening moment of the game as Tomiyasu beat Theo Hernandez and Rebic down Milan’s left flank and his low cross found its way to Sansone at the far post, and he should have done much better as he miscontrolled the ball.

Rafael Leao had his first chance in the seventh minute as Ibrahimovic’s ball forward was knocked into the path of the Portuguese forward via Saelemaekers and Rebic, but he couldn’t get a sweet enough connection and skewed his effort wide from inside the box.

Milan were inches away from taking the lead with what would have been an inspired piece of play from Theo Hernandez. The Frenchman looked ready to float a delivery into the box, but the ball almost lobbed over Skorupski who had to tip it onto the bar.

The Rossoneri had a penalty shout in the 20th minute as Leao threaded a lovely through ball to Zlatan Ibrahimovic whose movement had got him some space in behind, but as Skorupski arrived he got enough on the ball to clear, with the shouts for a spot kick unfounded in the end.

Not long after, Milan would get their penalty. Skorupski was again called into action to make a fine double save to deny Ibrahimovic first with a header and then from a close range rebound, but as the ball came back in Leao was hauled down as he tried to get to a ball in behind.

Ibrahimovic took on the responsibility from 12 yards and saw his effort saved, but Rebic was on hand to tuck in the rebound and deny Skorupski further heroics.

Milan went in search for a second goal before the break to really take charge of the game, and Leao cut inside onto his right foot to test the Bologna stopper again. He responded with a diving save, and Ibrahimovic put the rebound wide from a narrow angle with the net gaping, but he was offside anyway.

Orsolini tried his luck not long after with a powerful left-footed shot from outside the box and there was a heart-in-mouth moment when it rippled the net, but thankfully the outside netting.

Donnarumma was called into action for the first time as Sansone was found by an excellent pass in behind, though he hesitated on shooting and that allowed Donnarumma to narrow the angle and save with his right thigh.

Calabria was involved in two key moments in the space of a few seconds, and neither were good. The full-back should have converted from about seven yards when found unmarked by an Ibrahimovic knock-down, and moments later his poor touch allowed Bologna to break and Dominguez forced a great save from Donnarumma with only him to beat.

Milan’s No.2 was again involved just before the break, this time firing a rebound over from the edge of the box after Theo Hernandez’s shot had been parried into his path.

There was a moment of panic inside the first minute of the second half for Milan as a corner at the near post was somehow directed goalwards by Soriano after a ricochet off Ibrahimovic, but thankfully it was straight into Donnarumma’s hands.

Milan were awarded yet another penalty nine minutes into the second half, and again there were no arguments about this one. A ball towards the back post was almost caught by Soumaoro as the ball hit both of the defender’s hands, and Kessie this time took on the responsibility, scoring past Skorpuski with a composed finish.

⚽️ That is excellent composure from il Presidente!pic.twitter.com/KmPCeN9bNK

The second goal seemed to bring some more confidence out of Pioli’s men as they went in search of a killer third goal. Calabria wasn’t far off as a counter-attack ended with him thumping an effort towards the far corner that Skorupski saved at full stretch, and the rebound narrowly evaded Leao at the far post.

Not long after, a double sub was made as Tonali and Rebic came off for the returning Ismael Bennacer and Rade Krunic. Inside the last 20 minutes another sub followed as Leao made way for Mario Mandzukic.

With nine minutes left on the clock, Andrea Poli halved the deficit. A counter down the Rossoneri’s left side ended with a cut-back to the former Milan midfielder, who thumped home first time into the near top corner.

The home side sensed their opportunity, and Donnarumma made a fantastic near-post save to deny a diving header from Soriano as a ball in behind reached the attacking midfielder. It was going wide, but the Italy international wasn’t to know and produced a strong hand to divert it wide.