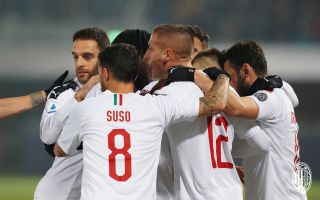 AC Milan won a thriller at the Stadio dall’Ara on Sunday night, prevailing 3-2 against Bologna to move into the top half.

Krzysztof Piatek gave the Rossoneri the lead from the spot before Theo Hernandez joined him on four goals for the season, but he then scored an own-goal to halve the lead.

Giacomo Bonaventura netted another gorgeous goal to pad the lead once again before Nicola Sansone’s penalty made it a nervy conclusion for Milan, who missed several chances on the break.

It was a shaky start for the visiting side who gave the ball away inside their own half twice in the space of a few seconds; the first time Gianluigi Donnarumma was the culprit, then Theo Hernandez surrendered possession resulting in a low shot from Rodrigo Palacio the was easily saved.

Despite this, the Rossoneri were given the opportunity to take the lead 12 minutes in when – after winning the ball back high up the pitch – Krzysztof Piatek was brought down by Bani in the area.

The responsibility fell to Piatek from the penalty spot, and the Pole made no mistake as he sent Skorupski the wrong way to give Milan a 1-0 lead.

Milan continued to grow into the game and came close in the 27th minute when Kessie found Calhanoglu with a pull-back to the edge of the box, though the Turkey international rolled his first-time effort narrowly wide of the far post.

Sinisa Mihajlovic’s side showed what they are capable of moments later as a nice interchange saw Nicola Sansone get the ball with space to run into the box, but his first touch was too heavy.

Just after the half hour mark Milan doubled their lead. After some nice passing play inside the final third, Suso slipped a ball in behind for Theo Hernandez, who got his fourth goals of the season with a calmly taken finish after taking a touch.

GOOOOOAAAALLLLLL! THEO STRIKES AGAIN! WHAT A PASS BY SUSO! pic.twitter.com/HgTmx9LMp9

However, five minutes before the break Bologna halved their deficit. An inswinging corner was met by the goalscorer Hernandez, who diverted the ball into his own net at the near post.

Less than a minute into the second half though the Rossoneri re-established their two goal lead. A giveaway was punished by Bonaventura as the midfielder curled his shot inside the left post from the edge of the box to make it 3-1.

Donnarumma was called into action minutes later though; the 20-year-old remaining alert to tip an Andrea Poli shot behind.

Just before the hour mark an amazing solo run from Ismael Bennacer allowed him to feed Piatek, and his shot was deflected wide much to the relief of the stranded Skorupski.

Bologna still had moments where they looked threatening, and Olsen should have done better in the 65th minute when he only fired straight at Donnarumma after cutting in from the right.

Pioli made a pair of interesting changes inside the final 20 minutes as Bennacer – who had a yellow card – coming off for Lucas Biglia, plus Bonaventura making way for Lucas Paqueta.

Bologna spurned a big chance to get themselves back into the game with 10 minutes left as Bani headed over unmarked from a free-kick.

They did however get a penalty of their own moments later as Orsolini was bundled over by Hernandez, and Sansone fired past Donnarumma despite the latter guessing the right way.

With five minutes added on, substitute Samu Castillejo had two huge chances to kill the game for Milan on the break but fired wide on both occasions, and Hernandez also saw a one-on-one effort saved.

It wouldn’t matter though, as the Diavolo held on for a vital three points to move 10th in the table and eight points away from the European places.